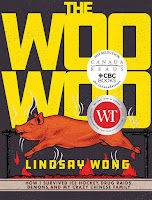 What book caught my eye this week as it passed over the library counter and under my scanner?

In this jaw-dropping, darkly comedic memoir, a young woman comes of age in a dysfunctional Asian family who blame their woes on ghosts and demons when they should really be on anti-psychotic meds.

Lindsay Wong grew up with a paranoid schizophrenic grandmother and a mother who was deeply afraid of the "woo-woo" -- Chinese ghosts who come to visit in times of personal turmoil. From a young age, she witnessed the woo-woo's sinister effects; when she was six, Lindsay and her mother avoided the dead people haunting their house by hiding out in a mall food court, and on a camping trip, in an effort to rid her daughter of demons, her mother tried to light Lindsay's foot on fire.

The eccentricities take a dark turn, however, and when Lindsay starts to experience symptoms of the woo-woo herself, she wonders whether she will suffer the same fate as her family.

At once a witty and touching memoir about the Asian immigrant experience and a harrowing and honest depiction of the vagaries of mental illness, The Woo-Woo is a gut-wrenching and beguiling manual for surviving family, and oneself."

(Over the Counter is a regular feature at A Bookworm's World. I've sadly come the realization that I cannot physically read every book that catches my interest as it crosses over my counter at the library. But...I can mention them and maybe one of them will catch your eye as well. See if your local library has them on their shelves!)