The Tiger Catcher - Paullina Simons - Q and A And Giveaway!

I'm today's stop on the blog tour for Paullina Simons' new book, The Tiger Catcher! Thanks Paullina for stopping by for a few Q and A! And I'm thrilled to to be able to offer an autographed copy of The Tiger Catcher to one lucky reader!

"The Tiger Catcher is the story of Julian, living a charmed life in Los Angeles, whose world is turned upside down by a love affair with Josephine, a mysterious young woman who takes him by storm. But she is not what she seems, carrying secrets that tear them apart - perhaps forever.  So begins Julian and Josephine's extraordinary adventure of love, loss, and the mystical forces that bind people together across time and space. It is a journey that propels Julian toward impossible choices which will lead him to love fulfilled ... or to oblivion."

I had a chance to ask Paullina a bit more about The Tiger Catcher...

Q. Your last epic love story began with The Bronze Horseman, which you published in 2001. Why have you waited so long to go back to this type of story?

A.  I will admit that after The Bronze Horseman I wondered whether or not I would ever write another book. I honestly thought there was nothing left in me to write about. Then I began the second book in the saga.

And then I had another idea, and another...

In 2014, I had an idea for a story about lost love and one man’s desperate search and an adventure to make things right, to get a second chance, to try again.

The story got bigger and bigger. I didn’t realize at first it was going to be this huge. But after about a year of writing and thinking about it, I knew. It just kept growing.

Q. Without giving anything away it’s fair to say that The Tiger Catcher has some mystical elements. You’ve been writing for twenty-five years, why enter this realm now?

A.  I can’t say it was an intentional move. The fact is that, for me, this story came from the same place that all my others have come. I simply had an idea. In this case, the idea was about a man who loved a woman so much he bridged time and space to find her.

Q. The Tiger Catcher takes place in Los Angeles and London. Do you have a personal connection to those places?

Q. The book also delves deeply into historical London, how did you do your research for that? How did you select the time periods in which to base your story?

A.  I lived and worked in London from 1984 to 1990, so I always felt a real connection to the city. And, of course, literature makes it hard not to have a sense of the history of London. There’s Shakespeare, Dickens, the romantic poets. As a child, the worlds of David Copperfield, Oliver Twist, and Sherlock Holmes were as real to me as my own. For me, the history of London feels like the history of Western civilization AND of my life.

As for research, living there helped. And I have been back many times since I left.

I’ll admit I was a bit jealous of my daughter’s favorite writer, Cassandra Clare, who is an American, but lived in London for many months while she was working on her 19th century supernatural stories set in England. I wish I could do that. Maybe when the kids are all out of the house.

The time periods were an organic process that that evolved from the story, itself. Where were Julian and Josephine in the narrative of their love affair? What stage was the progress of their souls? Where did they begin, where were they going, where did they need to be? And so each part of their story informed the next part, and the next. It was almost as if they, themselves, chose the settings for their adventures.

Q. Where did the title come from? Is tiger catching a real vocation?

A. Tiger catching is real. It’s an art passed down from generation to generation of families who live in East Asia. It’s infinitely more complicated than hunting, and success requires an almost spiritual connection to the tiger.

Q. The Tiger Catcher is billed as the first book in a trilogy. What can readers expect from books 2 and 3, A Beggar’s Kingdom and Inexpressible Island?

Thanks Paullina! The Tiger Catcher sounds fab! And if you think so too, enter for a win a chance to win an autographed copy, courtesy of William Morrow, using the Rafflecopter form. Ends June 29/19. 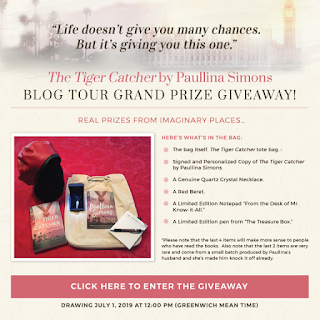 Paullina is also running a giveaway over on her blog with an amazing grand prize! You can check out the rest of the tour stops for more chances to win here.

"Paullina Simons was born and raised in Leningrad, USSR. In 1968, her father was arrested for protesting the Soviet Union’s invasion of Czechoslovakia and spent the next five years of his life in the Gulag prison camps and in exile. In the mid-seventies, Paullina and her family managed to leave the U.S.S.R. and immigrate to the United States. While growing up in Russia Paullina dreamed of someday becoming a writer. Her dreams were put on hold as she learned English and overcame the shock of a new culture.

After graduating from the University of Kansas and various jobs including working as a financial journalist and as a translator, Paullina wrote her first novel Tully. Through word of mouth, the book was welcomed by readers all over the world. She has since written twelve novels, a memoir, a cookbook, and two children’s books. Her books have been published in over 23 countries, sold millions of copies, and have been on many bestseller lists around the world.

Paullina has lived in Rome, London, and Dallas, and now lives in New York with her husband and half of her children.

Email ThisBlogThis!Share to TwitterShare to FacebookShare to Pinterest
Labels: blog tour, giveaway, Over the River Public Relations, Q and A, William Morrow

A captivating and memorable novel which I would enjoy greatly. Thanks.

Thank you for the chance. I am looking forward to reading it. The Bronze Horseman are my absolute favorite ♥

Thank you for the chance to win. I enjoyed the Q&A. Really liked the statement, "Los Angeles is the unrequited love of my life." London is my unrequited love. I saw this post in the Monday, Jun. 17, 2019 edition of The BookTube Your Shelf Daily Reader.

Beautiful cover! This book sounds emotional and really good. Thanks for the chance to win a signed copy!

Paullina Simons is my favorite author! I enjoyed the interview!

Thank you for the interview.