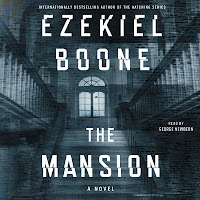 Ezekiel Boone gave me the heebie jeebies with his Hatching trilogy. (Spiders, giant spiders....) He returns with a new creepy thiller called The Mansion. And it's really quite timely....

Shawn and Billy were programming partners as young men. They created Eagle Logic - a brilliant system. But Shawn walked away with all the money when Billy walked away with Emily - Shawn's girlfriend. Billy hasn't fared so well - he's a recovering alcoholic, he's in debt and he and Emily are arguing. When Shawn offers up the chance to resurrect one of their failed projects - and pay Billy handsomely - he takes the job. They'll work out of Shawn's isolated mansion. And the project? It's named Nellie. And Nellie is "a next-generation computer program that can control a house’s every function."

And I'm not giving away much when I say you can see the possibilities can't you? And the realities from current news stories of technology gone wrong.....

The main plot didn't really surprise me. Boone takes a bit of a long path to the actual scary stuff. The tale is fleshed out with lots of detail and back story. A bit too much in my opinion. I wanted to get to the good stuff with Nellie. I think if I had read a physical copy, I might have been skim reading some of those passages.

But....I chose to listen to The Mansion and I quite enjoyed the audio version. In great part to the narrator. George Newbern is a perennial favorite reader of mine. He has the most expressive voice and brings an author's work to life with his inflections, timber and tone. His voice is clear, easy to understand and pleasant to listen to. He changes things up for each character and it is easy to know who is speaking. Another five star performance for Newbern. Listen to an excerpt of The Mansion.
Posted by Luanne at 7:00 AM

This one does sound good. I wasn't as inclined to sample that spider trilogy. I'm not afraid of spiders, but still...ha! However, this sounds much more like my taste. And a Canadian author - would be good for my Canadian challenge, right? :-)

Spiders, yikes! I'll have to check the narrators other books.

Didn't remember that he narrated A Man Called Ove. I listened to it and you're right, he's a great narrator!

I had this one on hold from the library, but I just really struggled to get engaged with it. I'm glad to hear you enjoyed it though.