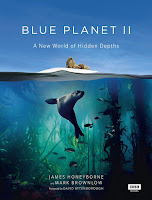 What book caught my eye this week as it passed over the library counter and under my scanner? What lies beneath.....?

"Our understanding of ocean life has changed dramatically in the last decade, with new species, new behaviors, and new habitats being discovered at a rapid rate. Blue Planet II, which accompanies an epic 7-part series, is a ground-breaking new look at the richness and variety of underwater life across our planet. With 300 breathtaking photographs and stills from the BBC Natural History Unit's spectacular footage, each chapter brings to life a different habitat of the oceanic world. Voyages of migration show how each of the oceans on our planet are connected; coral reefs and arctic ice communities are revealed as thriving underwater cities; while shorelines throw up continual challenges to those living there or passing through. A final chapter explores the science and technology of the Ocean enterprise—not only how they were able to capture these amazing stories on film, but what the future holds for marine life based on these discoveries."

Not a book I would pick up so glad for the update.

The photos are amazing Mystica.