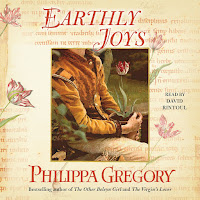 While mysteries and suspense are my favourite genres, I do enjoy historical fiction as well. I've often had patrons at the library recommend Philippa Gregory to me. Earthly Joys is the first book I've read by Gregory.

Earthly Joys opens in 1603 with the death of Queen Elizabeth and the succession of  her cousin King James VI of Scotland - the beginning the Stuart reign of England. Earthly Joys is written through the eyes of and life of gardener John Tradescant. It was only on further investigation that I learned that Tradescant is an actual historical figure. He was gardener to the aristocracy , a traveler, a collector and much, much more.

Gregory's research is detailed and her fictionalization of Tradescant's life is fascinating. He is a strong personality, but loyalty, honour and duty drive the decisions in his life. I quite liked him to begin with, but found my opinion often changed as his life progressed. And that was true of many of the characters, including his wife Elizabeth and son John. They are not as mercurial as John the Elder, but I applauded their views, beliefs and hopes for a different society. There are some particularly vile characters - notably the Duke of Buckingham.

Tradescant's love of plants and trees and his skills are so vividly depicted that I felt I could 'see' his garden. Rich detail is woven throughout Gregory's narrative clearly illustrating both time and place.

Now, this isn't a time period I would normally gravitate to, but I chose to listen to Earthly Joys, which made a huge difference. I felt drawn into the story, could make sense of what political machinations were afoot and the characters sprang to life for me.

The reader was David Rintoul and he was absolutely wonderful. He has a powerful voice and uses it well. He captured the character of John the Elder perfectly, using his voice to interpret Gregory's work and bring it life. His tones are rich and sonorous with a lovely gravelly undertone. He uses a softer tone for the female players that works just as well. His voice is pleasant to listen to and easy to understand. He matches his voice to the tenor of the tale. Listen to an excerpt of Earthly Joys.

Earthly Joys covers the whole of John the Elder's life. I was pleasantly surprised to find that the Tradescant story continues in a sequel titled Virgin Earth with John the Younger taking the lead role.
Posted by Luanne at 7:00 AM

For readers if historical fiction this sounds ideal.

You're right Mystica. There are some sexual scenes that may offend gentle readers though.