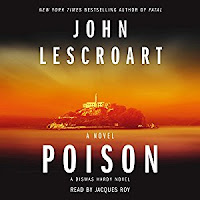 A former client of Dismas has been charged with murder. Her employer has been poisoned - and she stands to benefit from the will. But, there are a myriad of other suspects. It's a family business and any of the man's relatives had an opportunity to kill him. And as Dismas digs into their lives, looking to clear his client, he discovers they all have secrets - and motives.

I've always enjoyed Dismas as a lead character - he's intelligent, cagey and driven to find answers. The supporting cast has always included now retired SFPD Lieutenant Abe Glitsky. They play well off of each other, with differing personalities and styles, but with an eye on the prize - catching the guilty. (Glitsky has a few novels where he is the lead character.) PI Wyatt Hunt is also a fave supporting player of mine.

The murder method in Poison was unusual and clever. Dismas's sussing out of the murderer was just as clever. The whodunit is somewhat revealed before the final aha, but the path to those final answers was enjoyable and entertaining.

I enjoyed the return to Hardy's roots - murder, defense and the courtroom. Some of the previous entries became too convoluted and a bit far fetched for my taste.

Lescroart has moved the series along in real time, with the players aging and evolving. The Hardy family life has figured into the plots over the years. Dismas is now looking at making a change as well and has been contemplating retirement. I will be curious to see where Lescroart takes him in the next book. Although Posion is part of a series, it can be read as a stand-alone.

I chose to listen to Poison. The reader was Jacques Roy - a narrator I've quite enjoyed in other books. He has a calm, quiet voice that suits the character of Dismas. His speaking is well paced, well modulated and easy to understand with a slight gravelly tone. That measured pace draws the listener into the story. Listen to an excerpt of Poison.
Posted by Luanne at 7:00 AM

I've heard tons of great things about Lescroart, but have never ventured into one of his books myself. 19 entries is a lot, but I may have to pick these up soon!