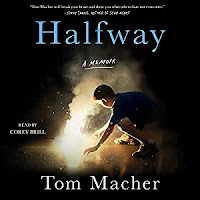 Macher came from a dysfunctional home, was an alcoholic youth, a petty criminal and lived in a string of communes, boy's homes, rehabs and halfway houses. All this before he's twenty.

Halfway is a documentation of these times and places with an emphasis on two halfway houses. Macher's recollections are sharp and focused, rattled off with machine gun rapidity. His honesty is admirable, baring his life for all to see. I hurt for the young child ignored by his birth father. Understood the anger and acting out of a growing boy. And the inevitability of the path his life was taking. Macher seems to have given in and given up, but he never loses the hope for something better for himself. He falls many, many times, but keeps getting back up.

We meet other residents, all with a nickname and a story. The groups, interactions and tenacity of the boys/men living together. The expectation that they will fail from those meant to help them. And the hope that they won't. I work in a low income neighborhood of a mid sized city. I interact with many addicted, homeless and marginalized people each day. Macher's memoir gives us a window into what life might be like for some of these people.

I chose to listen to Halfway. The reader was Corey Brill and he was the perfect choice. His voice has a defiant attitude to it and captures the tone and tenor of Macher's memories. His inflection is a perfect match for Macher's story. His voice is clear and easy to understand and the speed at which he speaks captures that machine gun delivery of Macher's almost stream of consciousness narrative. Here's an audio excerpt of Halfway.

Can you put a rating on someone sharing their life story? No, but if pressed, someone's life can be no less than five stars. Halfway is a dark and gritty memoir - one I'm glad I listened to.

"Tom Macher grew up in Georgia, New York, and California and spent his teenage years bouncing around from boys’ homes to halfway houses to communes in Montana, New York, and Louisiana. He attended Riverside City College, San Francisco State University, and The University of Iowa Writers’ Workshop, where he was a Teaching-Writing Fellow. He has twice received fiction fellowships from the Fine Arts Work Center in Provincetown. Halfway is his first book."
Posted by Luanne at 7:00 AM

This sounds right up my alley. I'll have to look for the audio.