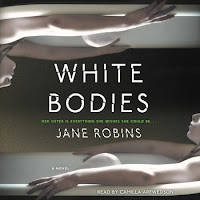 Callie and Tilda are twin sisters, but very different in their personality and lives. Callie is an outgoing actress, married to Felix. Tilda is reserved and single. When Tilda begins to notice changes in Callie's behaviour, appearance and demeanor - not working, not eating, with bruises on her body, she is sure it is Felix's doing as he has a temper. In an attempt to understand what might be happening to her sister, Tilda goes online and joins a support group for abuse victims and their friends and families. She makes the acquaintance of a woman who agrees to take things a step further....think Strangers on a Train.

I loved Robins's premise - there are so many possibilities. Especially with twins. But the focus of White Bodies is more on relationships - that between the sisters takes center stage.

In an interview, Robins uses the words intense, eccentric and twisty to describe White Bodies. Its the eccentric that stands out for me. I found the behaviour of both sisters decidedly odd and frankly quite off putting early on. Callie eats her sister's hair and drinks her urine. Yes, she eats things belonging to others to feel close to them. Uh huh. Gagworthy for me. Tilda is not the only one with mental issues. We do get some background into the sisters' past with background chapters. But for me, there were no likable characters in White Bodies.

Yes, there's a nice twisty bit at the end, but overall White Bodies was a miss for me. I'm in the minority on this one - I point you towards favorable opinions on Goodreads.

I chose to listen to White Bodies. The reader was Camilla Arfwedson. Her performance was excellent, as always. Her voice is clear, well enunciated and pleasant to listen to. She interprets Robins' work well.  Listen to an excerpt of White Bodies.
Posted by Luanne at 7:00 AM

OK, no, just no. Truly. Crossing this one off my list. Cannot read about hair eating and urine drinking. LOL

Ewww. Glad you reviewed it. A little more than odd sounding. Thanks for sharing!

Great review Luanne!
I’ve read a few too many psych thrillers with crazy, unlikable characters, so i think i’ll pass on this one.
Hope your next read is 5 star worthy!

Kay, most definitely 'just no'.

Kelly and Mystica - Eww sums it up.

Icewineanne - I think I've found a five star from a Canadian author - it's darn hard to put down...

Looking forward to hearing about the terrific book Luanne ;)