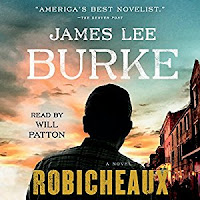 Of all of James Lee Burke's novels and characters,  Dave Robicheaux is my favourite. The latest, (#21), featuring this iconic character is Robicheaux.

Burke takes us back to Louisiana. Now semi-retired as a cop with the New Iberia force, Dave is struggling with the loss of his beloved wife, his battle with alcohol and the ghosts of the past. He loses the battle with the bottle one night, blacking out with no memory of anything the next day. A murder took place that night, one that has ties to his life. He couldn't have done it, could he? He's not sure, despite assurances from his daughter Alafair. And Clete - Dave's former partner and life long friend. There's so much more to the plot - drugs, the mob, bent politicians, an assassin, low life thugs and so much more. Burke's plotting is impeccable. Clete too is in trouble, having made some bad financial decisions, and now finds himself indebted to the mob.

But the biggest draw for me is Burke's descriptions and characterizations. His prose are beautiful, bringing time and place vividly to life. The good, the bad and the ugly of his beloved Louisiana. The social commentary woven into his stories are thought provoking. Dave's inner dialogue is raw and real. I love the sense of justice, right and wrong, that Dave and Clete share, even though justice sometimes takes a step over the line the wrong way.  The friendship between the two is unbreakable. But I worry as the two grow older. Burke has moved his books along in real time.

I chose to listen to Robicheaux. The narrator was Will Patton - and he was fantastic. His voice for Dave Robicheaux was perfect - measured, contemplative and easily evoking his thoughts and view of his world. But he also ramps it up into tightly controlled anger and rage. The voice for Clete is wildly different, but absolutely perfect - quick talking, sharp and caustic. I almost thought it was a completely different reader. The most chilling is the assassin. He speaks with a lisp that is truly terrifying. Again, another completely new tone, cadence and voice. All were clear and easy to understand. I appreciated having such distinct voices for each character. Listen to an excerpt of Robicheaux.

James Lee Burke is a consummate storyteller. Five stars for this latest.
Posted by Luanne at 7:00 AM

I'm trying to remember if I've ever read a book in this series. I'm pretty sure I read a couple of books in another series Burke writes - a Texas lawman or something. I love Will Patton's voice. Might have to listen to this book for that alone.

Kay, Will Patton is one of my favourite narrators as well.