If You Knew Her - Emily Elgar 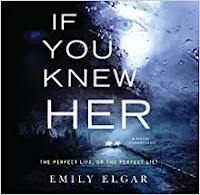 If You Knew Her is Emily Elgar's debut novel.

Cassie Jensen is out walking her dog late at night when she is struck by a car. She lands in an intensive care unit under the watch of Nurse Alice. Also in the ward is a patient named Frank, locked into his body, unable to communicate that he can hear and see. And as family and friends stop by the ward to see Cassie, Alice gets the feeling that something just isn't quite right. And Frank? Oh, Frank knows something isn't right - but he has no way of telling anyone.

What a great premise! We learn more about what led to this moment from Cassie's memories. There are two other POVs - Alice and Frank's. Bit by bit, the story is pieced together. Those rotating POVs had me listening to just one more chapter late into the night, seeing if I could guess the final whodunit. And guess what? I didn't! I love not being able to guess the final reveal. Each chapter does add to the mystery plot, but also explores each character's personal life though a development in the present.

I chose to listen to If You Knew Her. The reader was Katey Stobey. I quite enjoyed her voice. It's pleasant to listen to, easy to understand and I thought she interpreted Elgar's work well. Her inflections and tones match the content and characters well. Listen to an excerpt of If You Knew Her.

This was a fantastic debut and I can't wait to read what Elgar writes next!

“Emotionally charged and tautly plotted, Emily Elgar’s debut is a stunning example of psychological suspense.”—Clare Mackintosh, international bestselling author of I Let You Go and I See You

I'll have to look for the audio of this one to listen to soon!

I noticed this one a while back and put it on my list. Thanks for reminding me. It sounds like one I'd enjoy very much.

Bermudaonion - it was quite a clever debut.

Ethan - This is a really good one to listen to.

Kay - It's worth a read or listen for sure!