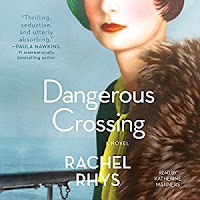 I've been watching old Hercule Poirot movies in the evenings lately. They're somehow soothing with the time period, the mores and manners and the paced deducing of the whodunit.

The description of Rachel Rhys's (a pseudonym) new novel Dangerous Crossing appealed to me for the same reasons.

Dangerous Crossing is set in 1939, with the world on the brink of another world war. Lily is on a ocean liner, headed from England to Australia with other young women to start new lives. The liner is carrying many others, from socialites, refugees, tourists and those headed home. The ship seems like another world, with social lines being crossed. Lily makes friends with a couple from first class and develops feelings for a young man also above her 'station.' But all is not perfect on the voyage.........

I loved the setting; the possibilities that exist in this detached microcosm of society. I was able to picture the boat clearly in my mind. As well as the clothing. Rhys takes her characters off ship with some port visits. I enjoyed the descriptions of those locales as well - Naples and Cairo.

I initially bonded with lead character Lily, but as the book progressed, I found myself unhappy with her choices, her thinking and her actions. I was surprised at some of her decisions, but can see how she got caught up with her taste of 'another life'. Other characters were also unlikable, notably one passenger called George. His views of others and his opinions were loathsome. First class passengers Eliza and Max were just as distasteful. The one character I did like from start to finish was Ian, the native Aussie.

I think I went into this book, expecting a slightly different read based on this descriptive line from the publisher - "By the time the ship docks, two passengers are dead, war has been declared, and Lily’s life will be changed irrevocably." This is all true, but I was looking for more of a whodunit I think. The focus of Dangerous Crossing is more on Lily's life being changed. Now, that's not to say I didn't enjoy the book. I did, just not as much as I hoped to.

I chose to listen to Dangerous Crossing. The narrator was Katherine Manners. She was excellent, creating many different voices, tones and accents for the cast. Each was believable and fit the characters. Her diction is clear, easy to understand and pleasant to listen to. Listen to an excerpt of Dangerous Crossing.
Posted by Luanne at 7:00 AM

This is on my list to read soon. Somehow, books set on an ocean voyage are always favorites of mine. Not sure why. I get terribly seasick. LOL

LOL Kay! I too like the 'ocean voyage' settings.