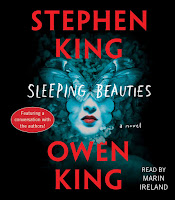 I'm a long time Stephen King fan, having read everything he's ever written. His sons, Owen King and Joe Hill are also talented writers. Sleeping Beauties is a joint effort between father and son Owen.

Sleeping Beauties is set in a small Appalachian town where the biggest employer is the women's prison. I love the weirdness that creeps into King's small towns. This one is no exception. As the women of the town start falling asleep, they become covered by white, gauzy tendrils. And once they're asleep and covered, well, they don't wake up. If the covering is torn away - let's just say it's not good for the men. There's one woman who has no trouble waking and sleeping with no ill effects. Who is the mysterious Evie? As more and more women fall asleep, the men begin to panic....are they ready for a world with no women?

On the one hand, Sleeping Beauties is a classic King horror tale. Taking something as innocuous as falling asleep and running with it. I love King's sideways view of the world and the pockets of unreality he imagines. But you could also look at the book with a different eye as well - in a social commentary sense if you will. Women's rights, the abuse of those rights, sexism, violence and more. There's also a snake in a tree and a woman called Evie.......'nuff said. There's a choice to be made by the women in the book. (Yep, including the sleepers)

I chose to listen to Sleeping Beauties. I've often said that listening to a book immerses me more fully in the story than reading. This was definitely the case for Sleeping Beauties. The performer (because she did more than narrate!) was Marin Ireland - and she was fantastic! She has a bold voice, easy to listen to and so very, very expressive. There are many characters in this novel and she created numerous voices, accents, tones and cadences to illustrate them. Her interpretation of the book was spot on.

How much of the book is Steven and how much is Owen? You know, it's not something I ever tried to discern. Instead, I happily popped in my earbuds for twenty five hours of what if...... and enjoyed every moment of it. Listen to an excerpt of Sleeping Beauties.
Posted by Luanne at 7:00 AM

I don't tend to read Stephen King, but this one keeps catching my eye. Maybe I'll try it on audio after the holidays.