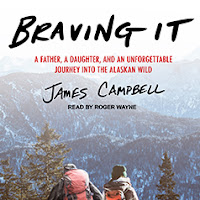 This is the kind of thing I wish I could have done when I was younger. Seeing more of the world, being a little more adventures and taking chances. But, at this stage, I am just as happy to read about others' adventures.

That's the story in Braving It: A Father, A Daughter, and An Unforgettable Journey Into the Alaskan Wild by James Campbell.

James Campbell and his fifteen year old daughter Aidan headed to the Alaskan wilds not once, but three times. Winter and Summer. They visited Heimo Korth and his wife Edna twice, helping to build their new cabin, hunting and trapping. The third visit was braving and paddling the HulaHula river.

Campbell's descriptions of the land, people and lifestyle of Alaska are vivid and powerful, attesting to his love of the outdoors, notably Alaska. Campbell is an established writer and he knows how to tell a story. I was captivated by the details - what it takes to stay alive in this wild country, the dangers and the simple pleasures.

And while Braving It is on the face of it a travel adventure and memoir, its also the story of Campbell and his daughter Aidan's relationship. Campbell's decision to take his daughter to Alaska was not made lightly. We are witness to Aidan's burgeoning love of Alaska, her growing confidence and her continued love of the outdoors. These trips ignite a sense of wanderlust in Aidan - I would be curious to see where life takes her. Campbell is torn between protecting his daughter and allowing her to grow. These trips are almost a coming of age - for both of them.

I chose to listen to Braving It. The narrator was Roger Wayne. I thought he interpreted the novel really well. His voice is pleasant to listen to and easily understood. His reading depicted Campbell's thoughts and emotions well. His inflection and thoughtful pauses allowed the reader to feel as thought we were having a conversation with Campbell. He provided distinct voices for each person. Wonderfully written and a treat to listen to. Listen to an excerpt of Braving It.

I would still love to do something like that but I'm not brave enough. This sounds like an incredible story.