The River at Night - Erica Ferencik 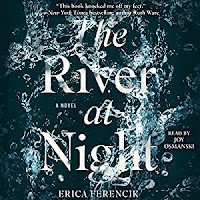 The River at Night is Erica Ferencik's (fantastic!) debut novel.

We all have them - long term friends that you try to get together with at least once a year. That's what Wini, Pia, Rachel and Sandra try to do, picking a new vacation destination every year. It's white-water rafting this year in the remote wilds of Maine. A place where no one lives. Or do they? And when they have an accident on the river..... Great premise!

Great plotting - a hint of Deliverance for those that remember that movie. (No worries, not as graphic) Lots of action. I kayak, but I don't think I'll ever go white water rafting. And I no idea what was going to happen next. I can't tell you how much I appreciate being kept in the dark, wondering where an author is going to take the story.

I chose to listen to The River at Night. The narrator was Joy Osmanski. Her interpretation of the novel was excellent. Each woman was easily identifiable - with their own tone, cadence and attitude. I absolutely believed the interactions between the four. And the other characters (not going to spoil it by saying who) had a dark and sinister voice that gave me chills. Osmanski conveyed the sense of danger and desperation really well - and had me listening to just one more chapter before turning in. This is a book I know I enjoyed more by listening. I felt caught up in the story, included in the conversations and decisions. Although I was mentally voting (and shouting) 'no' for many of their choices!

The River at Night was such an addicting tale! Absolutely recommended. I'll be watching for Ferencik's next book! Listen to an excerpt. Or read an excerpt.

The River at Night is An Oprah.com Page-Turning Novels Pick, A 2017 Indie Next Pick, A Bustle Most Anticipated Thriller Novel of 2017 and an An Entertainment Weekly “Must List” Pick! You can follow Erica Ferencik on Twitter.

I listened to this one too (narrator was great!) and, like you, found it very compelling. I kept picturing Merryl Streep in the movie, The River Wild. Can't wait to see what this author writes next!