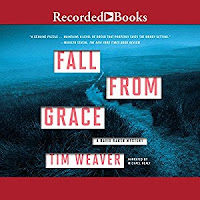 Fall From Grace is the fifth book in Tim Weaver's David Raker series. But it can certainly be read as a stand alone.

Who is Raker? Well, his background is in journalism, but he has since set himself up as private missing persons investigator.

Leonard Franks retires from the Metropolitan Police and heads to Dartmoor to spend his retirement years with his wife in the country. Until the day he goes out to get firewood and disappears. Not a trace of him, despite a police investigation. After nearly a year, his daughter Melanie, also working in the Met, employs Raker to have another look. This is unusual in that Raker and Melanie have a antagonistic past with each other. But, in spite of that Raker takes the case.

Raker's investigation is methodical and measured, with one revelation or clue leading to his next avenue of inquiry. But the case itself is not as straight forward. Weaver has created a mystery that is more complicated than what I initially imagined it would be. Many revelations along the way led to a much different outcome than the one I initially imagined. I did find the plot become a bit overly convoluted as the end neared.

Weaver weaves in a personal storyline for Raker. He has recently discovered he is the father of an adult daughter. Their relationship seems a bit forced to me, but it gives Raker more depth.

I've read previous books in this series, but chose to listen to this latest. The reader was Brit Michael Healy. His voice is measured and well modulated, with a slight gravelly tone His accent is easily understood. It conjured up a slightly different picture of Raker than the one I had in my head from previous books. But it fit - he sounds confident and in control. Dialogue and action scenes are given their due, with inflection and intonation. It's funny what you hear when listening to an audiobook. I could hear the sighs, some swallows and a few other non verbal sounds that make it actually sound like you are there. I like the Raker character, but did find that the audio version made him seen a bit pompous in parts. But this didn't detract from my overall enjoyment of the book.

Listen to an excerpt of Fall From Grace.

I need more books like this in my life.

The series is new to me but I will certainly be looking out for this author.