Saratoga Payback is the latest in Stephen Dobyns's critically acclaimed Charlie Bradshaw mystery series. It releases today - and I have a copy to giveaway to one lucky reader.

From the publisher, Blue Rider Press:

"Ever since the cops revoked his private investigator’s license, Charlie Bradshaw has been adjusting to life as a regular senior citizen. But reading, sitting around the house, and making amateur home repairs is a far cry from his past life as Saratoga Springs’ most successful everyman detective.

So when Charlie discovers the sprawled corpse of Saratoga Springs’ biggest nuisance on his sidewalk, the ex-P.I. is torn. Should he risk asking questions of his own, knowing he could easily be prosecuted for doing P.I. work without a license? Or should he avoid the trouble and spend his twilight years in peace? Well, the case was practically delivered to his doorstep…

Saratoga Payback, the latest installment in Stephen Dobyns’s critically praised Charlie Bradshaw Mysteries, follows Charlie as he toes the line between concerned private citizen and practiced private eye. As he begins to look into the murder of the town pest, Charlie also finds himself entangled in problem that is purely Saratogian–a mission to rescue an old acquaintance’s kidnapped horse. Wry, entertaining, and adroitly written, Saratoga Payback is an immensely satisfying addition to Dobyns’s popular mystery series." Read an excerpt of Saratoga Payback. 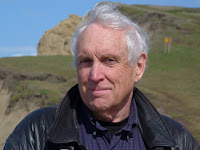 "Stephen Dobyns is the author of more than thirty-five novels and poetry collections, including The Burn Palace, The Church of Dead Girls, Cold Dog Soup, and Cemetery Nights. His novels have been translated into twenty languages, and his poetry has appeared in the Best American Poetry anthology. Dobyns, who has taught at the University of Iowa, Boston University, Syracuse University, and Sarah Lawrence College, teaches creative writing in the master of fine arts program at Warren Wilson College."

Sound like a series you'd enjoy? Enter to win a copy of Saratoga Payback using the Rafflecopter form below. Open to US and Canada, no PO boxes please. Ends March 25/17.

I would love to read this book—thanks for the chance to win a copy!

Thanks for this intriguing giveaway.

Oh sure! The retirement angle hooked me.

I enjoy books with sensior sleuths since I'm a senior too.

The cover looks very cool. This sounds like a fun book!

I LOVE A GOOD MYSTERY.

Mystery perfect for me.