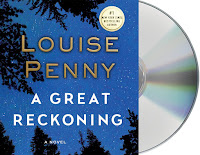 I am a huge fan of Louise Penny and her Inspector Gamache series. I've read or listened to them all. The latest (and number twelve) in the series is A Great Reckoning. I chose to listen to it as well.

Now, having expressed that I am a diehard fan, I must admit that the last few books have not been my favourites. I found them distinctly slower paced following on the heels of the long building Sûreté corruption scandal. With a resolution in hand, Gamache has retired and permanently moved to the quaint and quirky town of Three Pines.

Penny combines the best of both worlds in this latest offering. A map is found in the walls of the Three Pines bistro. It's an odd, old map, but is definitely depicting the village of Three Pines. But the village does not appear on any current maps and unless you know it's there, you would not be able to find it. Why is that? And what is the old map pointing to? But retirement hasn't lasted long for Gamache. He has again taken up the challenge of ridding the Sûreté of corruption - this time in the cadet training college.

Penny's plotting is at the top of her game in A Great Reckoning. Gamache has an intricate plan to rid the college of corruption. But there are those plotting just as hard against his actions. When a professor is killed, the stakes are raised for everyone.....

What can I say about this series? It's absolutely wonderful - I love all of  the characters. I've become invested in not only Gamache, but the residents of the village and their personal lives. It's hard to pick a favourite - but I am drawn to the grumpy old poet Ruth. She has hidden depths behind the façade she presents to the world. And darn it, I would love to live in Three Pines! As I said, the plotting is intricate and intriguing and incredibly well played. I truly had no idea where Penny was going with this latest.

When Ralph Cosham died (he embodied Gamache for me) I wondered if I could get used to the new reader. And the answer is yes, I have. Robert Bathurst has a lovely rich voice with an English accent, but he handles the French words and accent very well. His tones are modulated, again embodying Gamache's character. (He rarely raises his voice) He's easy to understand. He also provides different voices for the large supporting cast. I particularly like his voice for Ruth and her duck.

Just an excellent listen and I'm so looking forward to the next in this series. Listen to an excerpt. Or if you prefer, read an excerpt of A Great Reckoning.
Posted by Luanne at 7:00 AM

I've got several of her books but haven't read one yet and everyone I know loves them. I need to get with it.