From Alcon Entertainment and Warner Bros. Pictures comes the untold true story of “The 33.”

I remember following this story on the newscasts and praying that the miners would be rescued...

..."In 2010, the eyes of the world turned to Chile, where 33 miners had been buried alive by the catastrophic collapse of a 100-year-old gold and copper mine. Over the next 69 days, an international team worked night and day in a desperate attempt to rescue the trapped men as their families and friends, as well as millions of people globally, waited and watched anxiously for any sign of hope. But 200 stories beneath the surface, in the suffocating heat and with tensions rising, provisions—and time—were quickly running out.


A story of resilience, personal transformation and triumph of the human spirit, the film takes us to the Earth’s darkest depths, revealing the psyches of the men trapped in the mine, and depicting the courage of both the miners and their families who refused to give up.

Based on the gripping true story of survival—and filmed with the cooperation of the miners, their families and their rescuers—“The 33” captures the never-before-seen actual events that unfolded, above and below ground, which became nothing less than a worldwide phenomenon.

Get a sneak peek in the video clip below and you can see more about the movie atthe33movie.com. 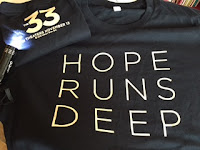 I have a promotional T-shirt for the film along with a flashlight to give away – kind of the perfect item to offer as a memento of a movie about miners. Enter using the Rafflecopter form below. Open to US and Canada, no PO boxes please. Ends Nov. 21/15.

Great cast for the movie! I remember watching this on TV.

I remember following that story too and admiring those miners and their families. What a gut wrenching story.

I was riveted to the television and the rescue. What a captivating story and giveaway. Thanks for this wonderful feature. saubleb(at)gmail(dot)com

I can't wait to see this! Thank you for the wonderful giveaway.
Erin

I want to see this movie!

I can't imagine being that far underground for one day let alone as long as they were there. It should be a super movie.

This looks great! I would love to see it!

A movie where Antonio Baderas is shirtless the whole time... Yes, please...

I remember being glued to my TV all night as I watched the rescue unfold. It should make for a gripping film!