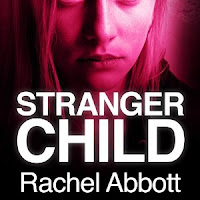 I only discovered this series and author recently when I listened to the third book, Sleep Tight. I enjoyed Abbott's lead character and plotting and wanted to see what was next for Tom.

In Stranger Child, David Joseph lost his first wife and daughter in a car accident six years ago.  His wife was killed - but his six year old daughter Natasha simply disappeared. Seven years on, David is married again to Emma and has a new baby boy.

And then one day, when Emma is in the kitchen, a teenager appears behind her - and doesn't say a word. Could it be......Tasha? It is. But she won't speak, won't say where she's been and why she was able to simply reappear. While her father is overjoyed to see her, she makes Emma very, very nervous. David seems satisfied with not knowing, but Emma decides to contact her old friend DCI Tom Douglas.

Abbot has penned an ambitious plot, with many twists and turns and lots of action.  I was completely caught up in wondering about the last seven years of Tasha's life. There were a few plot points that stretched credulity for me  - David not immediately calling the police when his daughter returned, no one taking her to the doctor and a few more. But.....the story is absolutely a page turner. I had my suspicions on the outcome, but was only proved partially right. Some previous loose threads from a secondary plot in Sleep Tight are tied up in Stranger Child. Well, not quite 100% - the door is open for the next entry in this series. I'll be listening.

The reader was Lisa Coleman, a different narrator from book three. I quite liked Coleman's voice. She has a strong, matter of fact kind of tone to her speaking voice. She easily conveyed male and female characters with her voice - I thought her characterization of each was distinct, suited and was easily identifiable. Coleman has a nice little gravelly undertone to her voice that is pleasant to listen to. My one suggestion would be to stick with one reader going forward to build continuity in future books.  Listen to an excerpt of Stranger Child.
Posted by Luanne at 7:00 AM

Hello dear friend ,
Nice day!
This is shriny, I’m glad to communicate with you.
I appreciate your writing skills very much, all your review articles are really great, and I can fell the reviews’ authenticity and sincerity, it is a great experience to read your article.
I feel you are a friendly and gifted person. So, I wonder whether I can be very lucky to make friends and cooperate with you? If you agree, could you please let me know via xisuyangfuyun@126.com?
I’m looking forward to your reply, thank you very much!
Best regards!
Shriny