Film on Friday #45 - Me and Earl and the Dying Girl 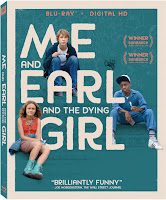 I'm not sure why, but there's a plethora of 'dying teen' movies being made. Me and Earl and the Dying Girl is recently released from Twentieth Century Fox Home Entertainment. It's based on the novel of the same name by Jesse Andrews.

Greg Gaines has worked hard at blending in, going unnoticed and being on good terms with all the different groups at his high school. Oh, and he makes quirky little films with his 'co-worker' Earl. He's coasting along just fine. Until his mother insists he spend time with Rachel who is battling cancer. They really don't know each other very well....but things change as he and Rachel become unlikely friends. Greg is forced to confront the truths that Rachel lays out - about both herself and him.

Great casting! Thomas Mann is wonderful as Greg - his glib banter and self-deprecating manner hide his lack of confidence. The connection between him and Rachel (Olivia Cooke) is absolutely believable. Cooke masterfully underplays her role - any louder or affected would not have worked. I must admit that Earl (newcomer R.J. Cyler) kinda stole the show for me. Again the relationship between Earl and Greg really works. Molly Shannon as Rachel's mom brought me some Saturday Night Live flashback moments. Jon Bernthal plays teacher Mr. McCarthy. Although his appearance is quite different, I still had a hard time not associating him with his Walking Dead role.

Now you might think that the plot would veer off into doomed dying girl teen romance territory. And I thought it was going to as well. Not so. Instead, Me and Earl and the Dying Girl explores friendships on many levels, coming of age, loss, love and more. Humorous, sad, quirky. An indie kind of take on what seems to be a newly recurring style of 'teen' film.

Cinematically, I found some of the long lens and fish eye shots took away from the movie for me. I started focusing on whether or not that staircase could truly be that steep instead of the dialogue happening. But, movies play a large role in Greg's life and the film, so I can understand why director Alfonso Gomez-Rejon would add some artistic touches. (Now this is just me, but I really didn't enjoy Greg's movies - and while Greg's final film has it's moments, I wasn't blown away)


All in all, I enjoyed Me and Earl and the Dying Girl - winner of the Audience Award and the Grand Jury Prize at the Sundance Film Festival. Have a peek at the trailer below.

The book was way too crude for me so I skipped the movie. It sounds like it was better.

I read the book too and I liked it alright, but it was definitely littered with extremely bad language!!