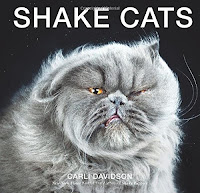 What books caught my eye this week as they passed over the library counter and under my scanner? It has been noted that I am perhaps more partial to dogs than cats. (Okay it's true....) In the interest of equal time and space, here's two for the cat lovers out there....this week's selections are from a coming soon list.

First up is Shake Cats by Carli Davidson.

Pet photographer Carli Davidson has enchanted readers around the world with her adorable photographs of man’s best friend in Shake and Shake Puppies. Now, she turns her lens on felines in this sweet and heartwarming volume that is pure catnip for cat lovers.

Shake Cats includes more than 130 gorgeous, highly detailed color pictures of felines in mid-shake. Like its predecessors Shake and Shake Puppies, it showcases a charming double-page layout—each spread features two images of the same cat placed side by side to capture the unique movement of the shake. Inside, fans will find a roster listing the names, ages, and breeds of cats photographed. Davidson also provides outtake images of her shoots with the cats, a short, insightful description that explains her process, and information about animal rescue to encourage people considering a new cat to choose a rescue animal.

A truly incomparable book—as beautifully designed as it is humorous—Shake Cats is the ultimate gift for every cat lover." 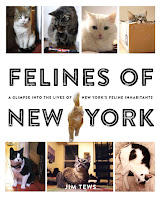 Next up is Felines of New York by Jim Tews.

From the publisher, Simon and Schuster:

Where New York humans are accomplished, interesting, thoughtful, creative, and even sometimes tragic figures, the cats are simply cats. They do not stand in line for brunch, or have season tickets to the Met, or go indoor-rock climbing in Brooklyn. They do not shop at thrift stores or nibble finger sandwiches at the Russian Tea Room. And they certainly do not give a flying f*ck about the Yankees.

No, the felines of New York bathe, purr, bask languidly in the sun, and occasionally cast baleful glances at the humans who provide them food and shelter. They are proof that behind every New Yorker, there lays a cat just waiting to destroy their IKEA futon and then eat their faces off when they die."

Email ThisBlogThis!Share to TwitterShare to FacebookShare to Pinterest
Labels: Over the Counter

Both of these sound wonderful. I just checked my local library & they don't have listings for them yet........but hopefully soon!
Many thanks for showcasing these books. Have a great weekend :-)