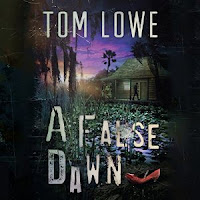 A False Dawn is the first book in Tom Lowe's Sean O'Brien series.

O'Brien was a police detective in Detroit, but with the death of his wife, he follows through on a promise he made to her. Quit the force and build a new life. He plans to fix up a cabin on backwater stretch in Florida. And live peacefully. It's a good plan until he discovers a dying young woman who whispers to him just before she dies......Well, once a detective, always a detective. O'Brien immerses himself in the search for who the girl was - and who beat her to death.

Lowe has created a strong, likable character in O'Brien that the listener can root for. I do like that he wasn't always right and made mistakes. There's a wealth of supporting characters. I was intrigued by a mysterious man named Joe Billie who appeared in the first few chapters - and then disappeared until his cameo in the final wrap up. Dave and Nick at the marina were engaging characters. I did find the 'bad guys' a bit cliched. Max the dog was a great addition to the cast.

The plot is ambitious and far reaching and on the dark side. (Fair warning to gentle listeners - there are some graphic scenes and strong language.) I had to suspend disbelief that the FBI would let a retired detective take such a leading role.

Listening to an audio book is a different experience than reading the novel. We tend to hear every detail - details we may have glossed over with a printed copy. My peeve was O'Brien's similes - even in stressful situations he's got something to compare. By the end they were simply annoying.

A False Dawn is a good first book and I would listen to another. (There are now five books in the series)

The reader, Michael David Axtell, was quite good. He has a clear, resonant voice with a little gravelly undertone that matched the mental image I had created for the character. He interpreted the book well, matching his inflection to the scenes. Listen to a sample of A False Dawn.
Posted by Luanne at 7:00 AM