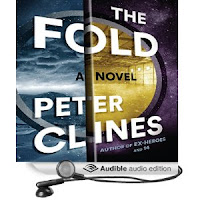 I don't read a lot of science fiction, but I know a good story when I see it - or hear it, in this case. I've also seen techno-thriller attached to this book as a label, which I think is better fitting.

The Fold is the first book I've read by Peter Clines, but it won't be the last.

It was the lead character that caught my interest in the first few chapters and held me until the very end.

Mike Erikson is a small town teacher in New England. He's happy at his job and enjoys his students. He also happens to be a genius with an eidetic memory, able to recall anything and everything he's ever seen, read or heard. He doesn't advertise this ability, preferring to live the quiet life he's chosen. One friend is aware of his skill set though - and asks Mike to take a look at a project he's funding. He's not sure if the group is telling him the truth about their results.

The project? Time travel, using a 'fold' of time that allows the user to travel great distances in a single step. Mike is intrigued.......and quite sure that the group is indeed harboring secrets - dangerous ones.

Well, of course I wanted to know what the secret was! The premise was great and the journey to the answers was intriguing. The story moved along at a fast pace, with lots of action as Mike ferrets out the truth and the resulting chaos. Cline's writing flows easily and was fun to read.

Mike's recall is fascinating - he uses ants as a mental depiction - black for memory, red for analysis. He was a a really likable character. The supporting cast is a mixed bunch - and although some of them are a bit clichéd (the lead scientist is quite obvious in his obfuscation) - they provided a good foil. A secondary plot involving a love interest between Mike and Jamie, one of the scientists, lends a personal note. Clines injects humour along the way as well.

Ray Porter was the reader - and he was fantastic. His voice exactly matched the mental image I had created for Mike. Supporting characters, many female, also had their own distinct voices, each creating and matching Cline's players. What I was amazed with was the quickness of the change in voices, sometimes in mid scentence. I absolutely felt like there were two or more people having a conversation - instead of one man playing many parts! Porter's voice reminded me somewhat of Robert Downey Jr's - a quick way of speaking, with lots of inflection and attitude easily conveyed.

I liked the ending, it's open ended enough for further books with Mike. I do hope this is the case - I would absolutely love to listen to another one - as long as its Ray Porter narrating. ;0)

(On a side note - this was the first time I've downloaded from Audible. It was very easy, the sound quality was great and it was available across all my devices. I downloaded to a mobile device - the app was great with lots of added features, such as a timer - I tend to listen before I go to sleep. I would absolutely download again.)
Posted by Luanne at 7:00 AM

Time travel? Did you read the book? It's not about time travel. It's about bridging space so that you can travel from one place to another instantaneously. There are several scenes in the novel where people at Site A communicate through the Door to people at Site B in real time. That's not time travel.

The end of the novel does involve the Door connecting to parallel Earth where time runs faster, but that's about it.