Film on Friday #38 The Longest Ride 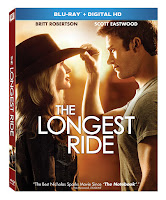 The Longest Ride, based on the best selling novel by Nicholas Sparks, has just released on Blu-ray from Twentieth Century Fox Home Entertainment.

Director George Tillman Jr. does a fantastic job of bringing this love story to the screen. (And staying true to the book)

Bullrider Luke (Scott Eastwood) is 'back in the saddle' trying to return to the top of his sport after an injury, when he meets Sophia (Britt Robertson) - a college student ready to graduate and pursue her dream job in the art field. When the two meet, sparks fly - but can love overcome dreams and ambitions? What, if any, choices and sacrifices will each be willing to make?

What makes The Longest Ride such a wonderful film to watch is the parallel story set in the 1940's. Luke and Sophia rescue Ira (Alan Alda) an older man and his box of letters from a car crash. Sophia continues to meet with Ira and from her letter reading we relive the love story of Ira and his wife Ruth. (Oona Chaplin is fantastic as young Ruth. Jack Huston is young Ira) The two stories mirror each other across the generations, through good and bad, only serving to illustrate that love takes sacrifice and the path to happiness is never smooth.

Watching The Longest Ride is going to make you happy though. Who doesn't love a love story? Great sets and scenery, a perfectly cast group of actors, some tastefully done steamy scenes, lots of action in the bull ring and an ending that's just right, all add up to a sweet, satisfying movie night at home. The Longest Ride is perfect to share with that special someone in your life or maybe as a girl's night at the movies. (As one supporting character says early on "I want a cowboy." Uh huh.)

Tillman took great care with realistically portraying the bull riding. Two of the special features on the disc follow Eastwood's training as well as the real riders. Fascinating stuff. There's also some good interviews with cast members, director and Sparks as well.

The title refers to the eight seconds a rider must stay on the bull to score, but The Longest Ride is also a nod to relationships - staying the course through a bumpy ride as well. Well worth watching for this movie lover!


And in case you missed it - you have until midnight tonight to
enter to win a Blu-ray copy of The Longest Ride from A Bookworm's World!

Thanks for all the info. I want to see this movie!