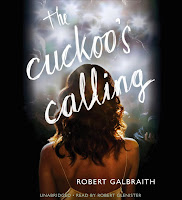 I must admit, if the identity of Robert Galbraith had not been exposed, I probably would not have picked up The Cuckoo's Calling. And that would have been my loss, as it's a really good book. I was disappointed with J. K. Rowling's first book after Harry Potter - The Casual Vacancy, but was curious to try this latest.

Cormoran Strike (love the name) is a veteran who was wounded both physically and mentally in the service of his country. He's returned to London and is now working as a private investigator. However, he's behind in his bills, has just one client on the books and has broken up with his long time girlfriend. That's when John Bristow turns up.  John's sister, a famous model, has died. The death has been ruled a suicide, but John doesn't believe it and hires Strike to prove otherwise. The second person through the door that day is Robin - a personable young woman from the temp agency.

The plot in Cuckoo is good, with the final whodunit being not what (or who) I had expected. The journey to the solution was a great trip, with lots of legwork and connections to be followed. It's an intelligent, believable plot. Galbraith chooses an interesting setting - the world of celebrity and has fun exploring (and sometimes skewering) the world of the rich and famous.

Galbraith has created two wonderful characters that I can't wait to see more of. Strike is intelligent, proud and yet vulnerable. I quite enjoyed Robin, who harbours a secret desire to be a sleuth herself. Her careful handling of Strike and his demons is well written. Galbraith lays the foundation for future books with these characters (the sequel is underway).

I chose to listen to The Cuckoo's Calling in audio format. Robert Glenister was the reader and he quickly firmed up the mental image I had built for Strike. His voice is rough around the edges with a bit of a growl that suited the character. His voice for Robin was just as suitable and easily conveyed a female character. British accents suitable to all the classes/characters portrayed were spot on. Glenister's reading speed and tone were excellent and I often felt like I was in the room, listening to conversations. Listen to an excerpt of The Cuckoo's Calling. Or read an excerpt.

This reader will be watching for the next in this series!
Posted by Luanne at 6:30 AM

I was disappointed with The Casual Vacancy too so I skipped this one. It sounds like that was a mistake.

I liked The Cuckoo's Calling very much, agree with your assessment.

I was a bit overwhelmed with all of the details, but realize that is J.K. Rowling/Richard Galbraith's stylg, and these element actually made sense when taken altogether.

Total agreement about Strike and Robin. I can't wait to see how Robin develops as a sleuth.

BermudaOnion - I was pleasantly surprised! Worth a listen or read for sure.

Kathy D - You're right - that is her style with all the details, but it made for a well plotted and well drawn book. The characters were the biggest draw for me.