Cut to the Bone - Jefferson Bass 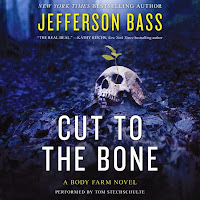 When Jefferson Bass put out their first Body Farm novel, I was a big fan. But as the series progressed, I found myself becoming disillusioned. With the last book - the plot was a stretch and forensic anthropologist Dr. Bill Brockton was mooning (drooling) too much over his younger assistant.

The latest book Cut to the Bone (#8) is a prequel. I thought I would give Dr. Bill one more chance and see what the early days of The Body Farm were like.

It's 1992, Bill is married and his son still lives at home and the idea of the body farm is still in the genesis stage. Brockton is called out to a number of crime scenes involving women who have been murdered in horrific ways. As the number of bodies pile up, Bill realizes that the killer is staging his scenes to match past cases from Bill's past. What does he have planned for Dr. Bill?

Well......I still think ole Dr. Bill is a bit of an a**. It's just in the comments he makes - 'joking' with his grad student that he's not a 'real' athlete because he does yoga. And again a second time. He just seems full of himself. All the time. His opinions and attitudes seem dated - this may be down to one of the author's ages - 85. His 'folksy' tone began to grate after awhile.

There are a number of chapters that just seem to be filler. A long narrative dedicated to a grad student's memories of a family trip seemed so out of place - and boring.

Bass seems determined to shock readers with the killer's grisly chapters. The killer's mindset and methods are described in much detail. I was reminded of James Patterson's style - short, titillating chapters. If you like that style, you'll probably like this author. Read an excerpt of Cut to the Bone.

What was good were the forensic details dealing with the origins of The Body Farm. Dr. Bill Bass is one half of this writing duo and was the actual founder.

I chose to listen to Cut to the Bone.  Tom Stechschulte was the reader. He has a very expressive voice that has a lovely rich, raspy tone. However, I found that the killer's voice and Dr. Bill's voice were very similar. Ditto for the grad student Tyler. Listen to an excerpt of Cut to the Bone.