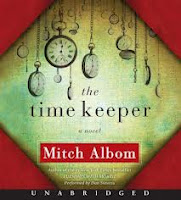 How often have you heard yourself say " I wish there was more time in the day. I just need more time. Where does the time go?"

Our days and lives are measured against time - calendars and clocks. But what about the first person to measure time?

Albom spins a fable about Dor - the first man to map the passage of the moon and sun, to track the minutes, hours, days and years. And how angry he made God with his measuring. For that,  Dor is imprisoned in a cave for thousands of years. His chance at redemption lies with the fate of two very disparate people. Sarah - a teenager determined to end her time on earth. And Victor - a terminally ill senior who desperately wants to prolong his time.

I chose to listen to The Time Keeper. Dan Stevens was the reader. He has a British accent, but is easily understood. He has a very versatile voice, conjuring up three very different voices for the characters. Albom's prose are quite spare and Steven's interpretation of the book really suited. Listen to an excerpt of The Time Keeper.

In retrospect, I was glad I chose to listen rather than read. It like I was being told a story.

The book is quite short and easily read in one sitting. Albom has written a book that is sure to make you stop and re-evaluate the passage of time in your own life. And to appreciate what we have and how precious it is.....

Read an excerpt of The Time Keeper. You can find Albom on Twitter and on Facebook.
Posted by Luanne at 6:30 AM

I do like the message of this book but I'm not sure it's for me. I read one of Albom's earlier books and found it a little cheesy.

Kathy - this was actually the first book of Albom's I've listened/read. I agree it's a bit 'in your face'. Preachy comes to mind as well. I probably won't try another.

I really enjoyed the message behind this book but it was hard for me to get through reading it, I found the breaks were awkward for me and I'm not really sure how I felt about the characters. I think it would be a good one to listen to instead of read.

While I haven't YET read The Time Keeper - I know I will. I have read every other book of Mitch's and have thoroughly enjoyed all of them!