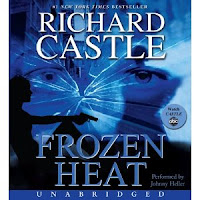 I'm a latecomer to the world of 'Castle' - which is a hit television series built around author Richard Castle's time with the NYPD as a ride along observer with Detective Kate Beckett. Castle has turned those ride alongs into a series of successful books featuring Detective Nikki Heat and writer Jameson Rook. But.....Richard Castle isn't real either. He's portrayed by actor Nathan Fillion who does a fantastic job pitching 'his' writing. With me so far? It's a great fun premise! I enjoyed Heat Rises last year. (my review) I don't watch a lot of television, but you don't have to be a fan of the show to enjoy the books.

The fourth book is Frozen Heat. Detective Heat's latest case involves a woman found stabbed and stuffed into a suitcase in Manhattan.  Nikki is in shock - her own mother was found killed in this manner. It can't be coincidence. And when she looks closely at the suitcase, she finds her own initials - the suitcase belonged to her. Nikki's mother's murder is unsolved after ten long years. Who has duplicated her murder? Why? Did the two women know each other? As she digs further, whoever is out there seems determined to make Nikki number three.....

I chose to listen to Frozen Heat as I knew the reader - Johnny Heller - was excellent. Although you might think that a male reader for a female protagonist might be an unusual choice, in this case, it just really works. Heller has a unique gravelly voice that is perfect. He modulates it to differentiate between the male and female voices. Much of the charm of Castle's books lies in the short, snappy dialogue and one liners. Heller's animated delivery of these lines is really entertaining.

But, along with all that snappy dialogue, Frozen Heat is a good mystery as well. The plot was well-paced and action filled. The ending left me a bit unsatisfied, but the door has been left open for the next book in the series. And I'll be listening!  Read an excerpt of Frozen Heat.

I absolutely adore the television show and I watch very little TV. I've wondered how the Heat books are and this one does sound good. I may have to check into it.

Nice review! I've just finished book 3 and want to start listening to book 4 but can't seem to get hold of it. Where did you get your audiobook from?

Thanks Danny - it's available on Amazon.co.uk. I received my copy from a publisher contact. :)