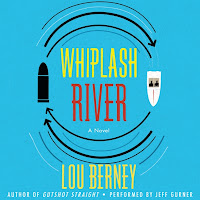 Whiplash River is the second book for Lou Berney. It picks up the story of  'Shake' Bouchon, the lead character from Berney's first book - Gutshot Straight.

Now I hadn't read the first book, but had no problem getting caught up in Shake's story. He's an ex con who has pursued and captured his dream of owning a restaurant in Belize. At last, he can live a nice quiet life on the up and up, earning his money legitimately. Except....he borrowed the money for the restaurant from local crime boss Baby Jesus and he's having trouble making payments - business is a bit slow. But the pace of Shake's life picks up when a masked gunman attempts to kill Quinn, one of his customers. This is just the opening gambit for a roller coaster ride of a read involving a rogue FBI agent, the miffed girlfriend of the gunman, Baby Jesus and his goons, the mob and more. And travel too! The book careens from Belize to San Francisco to Egypt.

I chose to listen to Whiplash River and I'm glad I did. The reader was Jeff Gurner and he was an excellent choice. The dialogue in Whiplash River is a huge part of the appeal of this quirky book. Gurner adopted many different and unique voices and accents that brought the whip smart patter to life. I think my favourite was Quinn - who has a story and an anecdote for every situation - I could just see him warming up to share his wisdom. His pacing was great and matched the speed of the action. His speaking voice is clear and easy to listen to. I think I enjoyed the audio more than I would have the book - listening to it just really brought it to life.

Berney has concocted a great fun read that doesn't take itself too seriously, but will keep you entertained. Comparisons have been made to Elmore Leonard and Carl Hiassen and I would have to agree. I'd happily listen to another of Berney's books. Listen to an excerpt of Whiplash River now.

Your review has me excited that I won a copy of this book.