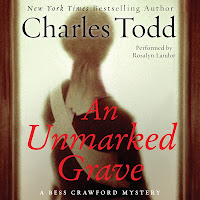 I recently had a patron ask if I knew of a good historical mystery series for her. She was older, and said she liked stories set in the war years such as Charles Todd's Bess Crawford books. (which she highly recommended) Well, I did indeed have a series for her, but although I was familiar with Charles Todd's Inspector Rutledge series, I had never read one of the Bess Crawford books. Her recommendation resulted in me picking up the latest installment of this series - An Unmarked Grave.

Bess Crawford is a World War I nurse. 1918 finds her at the front lines in France, with war casualties and the Spanish influenza contributing equally to the dead waiting to be buried. But when an orderly points out a body to Bess that isn't wrapped right, she is shocked to find she recognizes the man from her father's regiment. It wasn't the flu or war that killed him - she suspects foul play. But exhausted and physically worn down, she falls prey to the flu herself before she can report what she thinks might be murder. Back in England she does advise her father of her suspicions. But the body is long buried. Did she imagine what she saw? Or is there a murderer in the ranks? Bess is determined to find the answer and wants to return to France.

Todd's writing brought this time period to life. The dialogue, social mores and expectations of the time were wonderfully depicted, creating a strong sense of atmosphere.  Bess is such a great character - kind, dutiful, compassionate, strong, determined and intelligent. All of the characters were equally well drawn and just as engaging. I liked the idea of a woman being the sleuth in this time period, when men were the traditional 'leaders'. Bess is more than up to the task.

The plotting is good, slowly unravelling over time. This is a gentler mystery, meant to be savoured and enjoyed.

I choose to listen to A Unmarked Grave. The reader was Audie award winner Rosalyn Landor. She has a wonderfully rich, crisp British accent that perfectly suited the mental image I had of Bess. She portrayed all of the characters just as well. Most of the other characters were male and Landor came up with believable voices for them. Bess's father had a nice, gruff, regimental tone. The 'yank' soldier's voice was spot on as well. Her voice added much to the overall feel of the book, conveying emotion and setting easily. Listen to an excerpt of An Unmarked Grave. Or read an excerpt.

I really enjoyed this book and will definitely be picking up another in this series. Fans of Jacqueline Winspear's Maisie Dobbs character would enjoy this series. (This was my recommendation to my patron)

Glad you liked it; it was a good mystery with a perfect plot. However, I found it very sad and depressing because of the realistic descriptions of wounded and killed soldiers and the conditions on the battlefields and in the make shift hospital in France!

I really want to try this series - I think I'd like it.