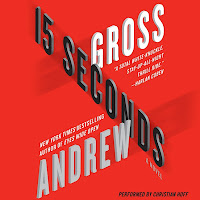 Andrew Gross's latest book - 15 Seconds - is exactly the kind of story that draws me in from the first page. Everyday guy lands in a situation that is far from ordinary - with no idea what is going on.

And that's what happens to Dr. Henry Steadman. While on his way to speak at a medical convention, he's pulled over by a local cop for a minor traffic infraction. Things escalate quickly and crazily and Steadman finds himself handcuffed in the back of the cruiser with many other cops now in attendance. Their line of questioning has him seriously frightened. Then just as suddenly, he's released and the extra patrol cars leave. Steadman is back in his own car, ready to leave as well, when a blue car pulls up to the local cop's car and shoots him point blank and races away. And just like that, Henry is a murder suspect. Things go from bad to worse when another body with connections to Henry is found.

What is happening? Who could be doing this to him? Why are they framing him? Henry realizes he can't go to the cops, so he must find the perpetrator himself.

I was initially sucked into the story quickly. As I said I find these kinds of stories irresistible. However, I found both the 'bad guy' and Henry somewhat tedious about halfway through. Their dialogue and actions become repetitive and the story lost its edge for me. Gross has co written five books with James Patterson and the same formula seems to have been used in 15 Seconds. Short sentences and short chapters with cliff hangers. Again, some of the sentiment, thoughts and angst of the characters is repeated - albeit with different phrasing - but the same idea. It became tiresome. I think I noticed it more because I chose to listen this book in audio format.

The reader was Christian Hoff, who has a great, expressive voice for audio books. He has a good, clear speaking voice and easily used his voice to capture the tension and pace of this thriller. But again, it was just a bit too much - the breathiness and angst became repetitive and overly dramatic.  But, as he's only reading what has been written, I'd have to say Hoff did a great job.

Fans of James Patterson will love this book. For me, it wasn't great, but was a good accompaniment for a few long walks. Listen to an excerpt of 15 Seconds. Or if you prefer - read an excerpt.