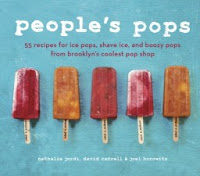 What books caught my eye this week as they passed over the library counter and under my scanner? Cool treats! 'Cause gosh darn it, summer isn't over yet...!

First up was People's Pops by Natahalie Jordi, David Carrell and Joel Horowitz.

From the publisher Ten Speed Press:

"A flavor-packed collection of 65 recipes from the trio behind the premier pops stand in the country, People’s Pops.

In 2008, three old friends had a hunch that the world deserved a better ice pop. Every summer since, New York City’s been taken by storm with out-of-the-box flavors like Raspberries & Basil, Peach & Bourbon, and Cantaloupe & Tarragon from People’s Pops. Now, the People behind the phenomenon share their DIY ethos in a breezy cookbook that teaches how to pair ingredients, balance sweetness, and explore fruits (and vegetables and herbs!)--in simple recipes that work with standard ice pop molds or improvised ones. With a chapter devoted to shave ice plus recipes for grownup boozy pops sprinkled throughout, People’s Pops proves itself top of the pops." 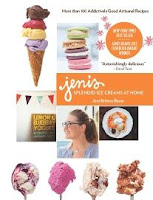 Next up was Jeni's Splendid Ice Creams at Home by Jeni Britton Bauer.

From the publisher Artisan :

"James Beard Award Winner: Best Baking and Dessert Book of 2011!
At last, addictive flavors, and a breakthrough method for making creamy, scoopable ice cream at home, from the proprietor of Jeni’s Splendid Ice Creams, whose artisanal scooperies in Ohio are nationally acclaimed.
Now, with her debut cookbook, Jeni Britton Bauer is on a mission to help foodies create perfect ice creams, yogurts, and sorbets—ones that are every bit as perfect as hers—in their own kitchens. Frustrated by icy and crumbly homemade ice cream, Bauer invested in a $50 ice cream maker and proceeded to test and retest recipes until she devised a formula to make creamy, sturdy, lickable ice cream at home. Filled with irresistible color photographs, this delightful cookbook contains 100 of Jeni’s jaw-droppingly delicious signature recipes—from her Goat Cheese with Roasted Cherries to her Queen City Cayenne to her Bourbon with Toasted Buttered Pecans. Fans of easy-to-prepare desserts with star quality will scoop this book up. How cool is that?"