Attachments is Rainbow Rowell's debut novel - and what a great debut it is! I adored it!

When the girl of his dreams broke Lincoln O'Neill's heart he retreated...into academia, moving back home with his mother and giving up socializing. He's even taken a night job with no contact with co workers. He's working at a newspaper (The Courier) as the Internet Security Officer. It isn't until he starts the job that Lincoln realizes he will be monitoring internal emails for inappropriate content.

Jennifer and Beth also both work at the Courier. They're best friends and their internal email is often (well, mostly) of a personal nature.  Which, of course, flags it for Lincoln. He should send them a warning, but he doesn't....he shouldn't keep reading their communications...but he does....He is fascinated by their lives and he finds himself falling in love with Beth.

Rowell has created such a warm, sweet, lovable character in Lincoln. His intrinsic goodness and caring (he's pretty cute too) make him a perfect catch, but he just can't see it himself.


"Lincoln wasn't inherently un-dateable. He'd gone on a date three years ago. A friend's sister had needed a date to a wedding. She'd danced all night with one of the groomsmen, who turned out to be her second cousin, while Lincoln ate exactly thirteen cream cheese mints."

"My get-a-life window. I think I was supposed to figure all this stuff out between twenty-two and twenty-six, and now it's too late."

The novel unfolds in alternating chapters - first from Beth and Jennifer and then from Lincoln.We get to know Jennifer and Beth, but in more of an arm's length way, as we only know of their lives through the emails. It was very easy to get caught up in Lincoln's quest to reclaim his life. It was impossible not to root for him. The supporting cast of characters were just as engaging. Lincoln's mom and her reluctance to let go of her son, his sister Eve and her determination to drag Lincoln out into the world and his loyal circle of Dungeon and Dragon playing friends. But of all the supporting characters I think I enjoyed Lincoln's interactions with Doris the snack lady the most. His kindness towards her was touching. 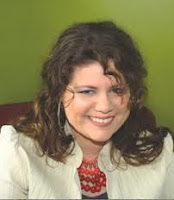 Rowell has written a delightfully heartwarming story. Attachments is a clever, witty, warm story that will capture you completely. A fantastic first novel - I'll be watching for Rowell's second!

Also available in audio format. Listen to an excerpt.

Want a chance to read it yourself? I have a copy to giveaway! Simply leave a comment to be entered. Open to US and Canada. Ends Sunday May 1st.

Check out what others on the TLC tour thought.
Posted by Luanne at 6:18 AM

I would love to read this book, it sounds really good.
twoofakind12@yahoo.com

This delightful book sounds wonderful and thanks for the great review. saubleb(at)gmail(dot)com

What an enjoyable and special book. Thanks for this lovely giveaway. rojosho(at)hotmail(dot)com

This sounds like such a cute book! No need to enter me.

I'd love to read this. Thanks for the giveaway.

I love the sound of this book. Definitely my kind of read.

My husband's name is Lincoln :) You don't run by that name very often!

This looks like a great read. Thanks for the amazing giveaway :)

Thanks for the giveaway! Please enter me as well.
mybookandcouch@gmail.com

Thanks for the giveaway.
Love & Hugs,
Pam
pk4290(at)comcast(dot)net

I just love the sound of this book and Lincoln seems like such a sweet character. Great review; thank you so much for being on the tour!

thanks would love a chance to win this

would love to read this, thanks

Thanks for the giveaway. Looks good!
mtakala1 AT yahoo DOT com

I'd love it!
s.mickelson at gmail dot com

I would love to read this book.

Ahh reading of secret emails no good can come of this or can it??? lol

I've been wanting to read this. Count me in. :) I'll post this in my Winning Wednesday blog, as well.
Thanks!
Melissa

I would love to read Attachments :) *Thanks* for the giveaway!
theluckyladybug[at]gmail[dot]com

sounds like a great read!
ykatrina at hotmail dot com

I've read so many interesting reviews of this book. I'd love to be entered.

I would like to read this book. Thanks for the giveaway.

Rainbow is a local for me - would love to win this one!

Sounds really good!! Thanks for the chance to win!

Please count me in! Thanks!
schaefer7382 at aol dot com

I've read some great reviews of this book and it sounds interesting. Please enter me in your giveaway!

This sounds good. I hate to think of someone reading my emails to girlfriends. They would be blushing!
smchester at gmail dot com

This sounds like a fun book to read! Thanks for the chance to win! wgbc1446[at]yahoo[dot]com

This sounds brilliant, could be me LOL - I am the most socialy awkwark person I know ;)
tracyschultz@yahoo.com

This is my first time hearing about this book and it sounds adorable. Thanks for the great giveaway :)

Sounds great would love to read this book
cellis1024@aol.com

This sounds like a great book to throw in the beach bag for some lazy summer day read!

I'm looking for something new to read, and this would be perfect.

I would love to win a copy of this book! Thanks for the chance!

I love to read!

I read Rainbow's newspaper column regularly and I would love to read this book.
willitara [at] gmail [dot] com

I am always looking for a new good read. Please consider me. Thanks!

I am always looking for a good read. Please consider me. Thanks!