I enjoy a number of genres - legal thrillers being one of them. But when mentally going over my list of favourite authors, I realized that none of the legal list were Canadian. So I was excited to read Robert Rotenberg's new novel The Guilty Plea.
Rotenberg is a practicing lawyer who lives in Toronto and has based his series in the same city. I love reading a book with Canadian references - Timmies, the Globe and place names as well - Eglinton/Bloor, Jane and Finch. Knowing the settings are real and having seen some of them make the novel all that more authentic.

But what makes Rotenberg's novels really pop is his knowledge of the Canadian legal system, his trial expertise and the number of years he's been at it. His plots, characters and dialogue all have the ring of authenticity and that 'insider's' point of view. It just makes his novel all the more believable.

The Guilty Plea brings back characters from Rotenberg's first novel 'Old City Hall'. Homicide Detective Ari Greene, Officer Daniel Kennicott, lawyers, Crowns and others. I found all of the characters believable and connected with them. Their personal lives are just as engrossing as the primary plot line.

In the Guilty Plea, Terrance Wyler, the youngest son of a Canadian food conglomerate is found stabbed to death in his kitchen while his young son sleeps upstairs. His estranged wife shows up at her lawyers - with the bloody knife from Wyler's kitchen. Open and shut case. But she swears she's innocent. As Greene investigates, he finds more questions than answers.

I very much enjoyed The Guilty Plea, although I found the end a bit rushed.  I will definitely be adding Rotenberg to my 'must read' list. Read Chapter One of The Guilty Plea.

A Bookworm's World was lucky enough to have Robert Rotenberg stop by for some Q&A!

I've read that you embraced writing from a young age and reluctantly became a lawyer. What was the impetus to finally combine the two?

Have these characters been percolating for awhile? Simon and Schuster have signed you for a number of books - hopefully for us at least one a year. Do you have a long term plan for the same core group of characters?

‘At least’ once a year. Okay, I’ll write three or four a year! But yes, Simon & Schuster have been wonderful. I’ve promised them 20 book in 20 years. That’s the plan. Hear that Ari and Daniel and Nancy?

And with that new commitment, will you continue to practice law? How do you manage now!?

Just set that alarm an hour earlier. In fact the reality is that to do a book a year I’ve had to cut back on my law practice. Ask my partners, I gave them the last murder trial that came my way and they are doing it night and day.

I love that I can picture many of the neighborhoods and places in Toronto that are featured in your novels. Any favorite haunts?


Thanks. I heard a theory the other day called “The Third Place.” (Sounds like a good title). In other words we need a place we live, a place we work and a “third place.” A few weeks ago I ended up slipping into a Coffee Time doughnut shop at 5:45 in the morning. The place was in a horrible strip mall in a very poor part of town. The waitress had that all-night tired look in her eyes and a thick Russian accent. In the corner sat two very fat, very sad looking older men in thick doing their crosswords. Not talking to each other or anyone else. I almost cried. There was something so touching about it. As I write this I’m in a coffee shop on Parliament Street, espresso machine is fizzing, music is blaring, babies are crying. As good as it gets.

What are you reading now for entertainment? Any favorite authors? Influential authors?


I am a chaotic reader. I find someone I like and I’ll read everything they’ve written. Right now I’m falling for Tim Winton. John LeCarre’s latest is wonderful. Can’t wait to read David Bezmogis’ new one. I still re-read Salinger and Hemingway short stories. Etc. etc. etc.
How has the local legal community reacted to your books? Anyone thinking they're seeing someone they know? 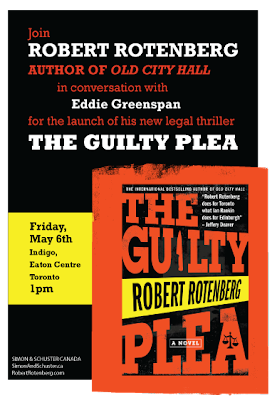 I always ask lawyers and judges if they laughed when they read Old City Hall. They all say yes.
The other day I was in court and the court reporter grabbed a pad of paper, and wrote on the back “loved your book.” And here’s a funny story. After Old City Hall came out, a judge stopped me in the hall one day and said: “Robert, that lawyer in the book, Nancy Parish, I know exactly who you based her on.” “Oh,” I said, smiling a bit to myself I must admit, “Who?” He then named a female lawyer. “Funny you should say that,” I told the judge. “You know, I’ve never heard of that woman in my life.” We both laughed. Here’s the kicker – I had no idea who that woman lawyer was.

(and this is just purely an off the cuff idea - what about auctioning off a character in your next book for charity?)

Hmmm. I really need to raise some money for the Canterbury Clinic, the drug rehab clinic I’m involved with. Why don’t you email some suggestions of how to do this. Love the idea.

I love a mystery series where the setting speaks to me as loud as the rest of the book. I'll have to see if my library has this series. Thanks to the author for sharing and thanks to you, Luanne, for introducing me to another series! Like a need one! LOL

I just checked Kay and it looks like it doesn't release in the US until July....

This one sounds interesting, and I agree that it is nice to read a legal thriller once in a while.

I enjoyed it a lot Dorte - the legal aspects weren't dry at all. Some legals novels get bogged down in explaining the 'system' and I find myself glazing over...

Kathy - There definetely are differences. Many of ours relate back to Britain.

I attended his reading of "The Guilty Plea" today ... it was interesting.

Greetings from the UK. You have helped me answer the very same question I was asking myself about Canadian legal thrillers and it has just inspired a blogpost of my own, as well as the addition of a link to yours to my writing and publishing section. Feel free to give me a shout if Hatred, Ridicule & Contempt and its background was likely to be of interest. Right, off to Twitter!