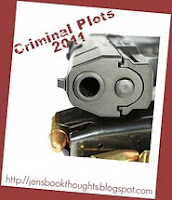 I joined the 100+ Reading Challenge last year finishing up with 145 books. (which oddly enough was the very same total as 2009!) This year I've decided to keep track of my 2011 reads on a separate page on my blog. For challenges, I'll continue The Great Canadian Challenge 4 and I've decided to join Jen's Criminal Plots 2011 Challenge.

"Rules of the Road:

So, what's involved in this challenge you ask? It isn't too difficult. It involves reading six books throughout 2011 (January 1 through December 31, 2011). One book should be read that fits into each of the following categories:

1. A book by a new to you author who's blurbed a book you enjoyed. So check out the cover of a crime fiction book you've enjoyed and see who blurbed that book and is also an author you've never read before.

2. A book that has been made into a movie. It doesn't have to be a movie you've seen but it can be. The book, however, should be one you haven't read before. (Examples: MYSTIC RIVER, L.A. CONFIDENTIAL, LONDON BOULEVARD, HOSTAGE, etc.)

Have fun with the challenge!

I'm not joining the challenge but I like the way it forces you to try new things.

Wow, that involves a lot of thinking. Good luck with the challenge and have fun hunting to fit the criteria. Sounds like a blast!!

I have never joined a challenge before but I'm going to try this one. I hope I can keep up. Thank you so much for posting about it - I wouldn't have found it.

It sounds fun, but I have joined five challenges already.

Thanks Kathy, Susan and Kaye! Yay - I'm glad you're joining Clenna. It's one of my favourite genres, so I don't think I'll have a problem finishing it over the course of a year. Five Dorte!? Eek - more than I could keep track of !