Two books caught my eye as they passed over my library counter and under my scanner this week. Both are about libraries - albeit from one end of the spectrum to the other. 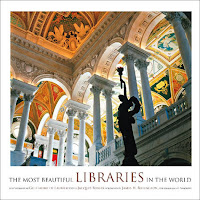 The first is The Most Beautiful Libraries in the World - an absolutely gorgeous coffee table book. Photographs by Guillaume De Laubier, text by Jacques Bosser.

From the publisher Abrams Books:

"All of the libraries in the world-whether small or large, public or private-serve the same purpose: to preserve, cherish, or show off the riches of human knowledge. Now, for the first time, an internationally renowned photographer takes the reader on a journey to more than 20 of the most historic of these magical places, all architectural treasures. From the dramatic, baroque Library of the Institut de France in Paris, to the splendid Vatican Library in Rome; from the majestic Royal Library in El Escorial, Spain, to the famed New York Public Library, a Beaux-Arts masterpiece—here are some of the most exquisite libraries of the Western world. Included are national, scholarly, and religious libraries from 12 countries, which have in common a distinguished heritage and an architectural setting that emphasizes art and culture. The accompanying text traces the history of libraries to the present day, and describes how they came to serve famous personalities and men of letters. Libraries must be counted among civilization's crowning achievements; this elegant book is a fitting tribute to that accomplishment."

The second is a look at libraries and life from a completely different perspective. Running the Books by Avi Steinberg. Subtitled: The Adventures of an Accidental Prison Librarian.

"Avi Steinberg is stumped. After defecting from yeshiva to Harvard, he has only a senior thesis essay on Bugs Bunny to show for his effort. While his friends and classmates advance in the world, he remains stuck at a crossroads, unable to meet the lofty expectations of his Orthodox Jewish upbringing. And his romantic existence as a freelance obituary writer just isn’t cutting it. Seeking direction—and dental insurance—Steinberg takes a job as a librarian in a tough Boston prison.
The prison library counter, his new post, attracts con men, minor prophets, ghosts, and an assortment of quirky regulars searching for the perfect book and a connection to the outside world. There’s an anxious pimp who solicits Steinberg’s help in writing a memoir. A passionate gangster who dreams of hosting a cooking show titled Thug Sizzle. A disgruntled officer who instigates a major feud over a Post-it note. A doomed ex-stripper who asks Steinberg to orchestrate a reunion with her estranged son, himself an inmate. Over time, Steinberg is drawn into the accidental community of outcasts that has formed among his bookshelves — a drama he recounts with heartbreak and humor. But when the struggles of the prison library — between life and death, love and loyalty — become personal, Steinberg is forced to take sides.
Running the Books is a trenchant exploration of prison culture and an entertaining tale of one young man’s earnest attempt to find his place in the world while trying not to get fired in the process."

Even the cover on The Most Beautiful Libraries is beautiful! Thanks for highlighting these books.

Ooh, they both look good to me!

Both books sound interesting! I saw on a website once the different libraries around the world. wow, what a visual feast!