I've had Life on my nightstand for a couple of months now. I've got some old vinyl (High Tide and Green Grass - the original 1966 release) on the turntable while I try to put thoughts to paper. Now, I wasn't buying music myself in '66 - but my youngest uncle was. I grew up listening to and loving all things rock 'n roll.


And really - Keith Richards is all things rock 'n roll. The Rolling Stone's longevity (creeping up on 50 years) is legendary. Just as legendary is guitarist Richards's longevity. Indeed - it has been asked many times - how is he still alive? 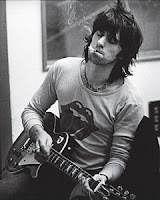 Richards is known for his excessive drug and alcohol use. I think what I expected when I started reading Life was a tell all book. But I was pleasantly proven wrong. Richards is intelligent, thoughtful, honest and funny. Much more complex than I would have thought. Yes,of course there are the drugs - they did play a huge part of his life, but he makes no excuses for it. It's part of his life, part of his past, part of what made him who he is.
It is his love of music that shines through the most though. The beginnings and birth of rock and roll in Britain, the exodus to the US, the players who started it all. Richards was there. These are the reminiscences I enjoyed the most. The 'gossip' is there as well. The friendship and rifts with Jagger are also an integral part of Richards' life.  His relationship with women, his children and his love for his family. Lots of surprising details about the man himself as well. A human face to put with the legendary tales. 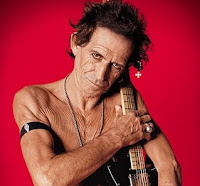 Life reads as a rambling conversation with a darn good storyteller. And there's always another story after that last one. I enjoyed reading this over the course of a couple of months. I like the pictures included in the book - lots of personal shots as well as band shots.
Life has been steadily on The New York Times Bestseller list since it's release. And it deserves to be. Recommended rock and roll reading.
Official Keith Richards website. Twitter and Facebook.

Get a sneek peek - read an excerpt of Life.
Posted by Luanne at 4:50 AM

I started listening to this and found it too rambling for me at the time. I'll get back to it soon.

Even the cover of his biography is rock and roll!