It Can Happen to You - Lynn Crymble 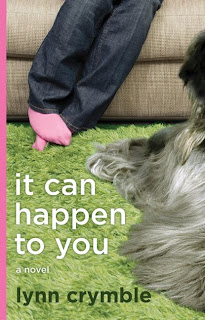 It Can Happen to You is the debut novel of Canadian Lynn Crymble.

Penny Stevens is busy planning a party for her 18th wedding anniversary. She borrows her husband's car and while looking for some change for the shopping cart, discovers some lipstick that's definitely not hers (and so not her shade). Penny is saddened but not completely shocked. After all it's not the first time her husband Jack has strayed.

"It's not that Penny hates Jack or that he is an evil person, but he just can't seem to stop putting his dick into other women."

The sad thing is that Penny has come to accept Jack's infidelity as part of her life. They don't sleep together, they don't have sex, quite frankly they don't interact anymore.

"He (Jack) might have been looking at her, but Penny was certain he didn't see her."

That is, until Penny plays Good Samaritan to an elderly couple and ends up in the news. Suddenly a local writer wants Penny to be part of her 'Renovate Your Life' feature.

She resists and resists, but "Penny is coming to realize just how adamantly she has been committed to never altering a single iota of her unhappy life."

What follows is Penny's journey to reclaim her life and find happiness. A theme that has been tackled before, but Crymble does a great job in putting a fresh spin on this contemporary tale.

Crymble had me laughing out loud many, many times throughout the book. Penny's entrapment in a toilet stall in a large bookstore had me giggling. The writing is witty, yet touching as well. Penny's befuddlement and unhappiness with her life arouse just as much feeling as the comic situations. The supporting characters are just as lovable, but slightly clichéd.

The first half of the book moves along at a steady pace. Towards the end, the plot speeds up and I found the changes a bit jarring. The time frame shifts, but is not explained until later on. This could be intentional, to mimic the changes in Penny's life.

Without spoiling the plot, I must say that the twist involving a name anagram was just too contrived for me.

The outcome is no great surprise, but it's a sweet journey to the end. A strong debut from a new voice on the Canadian fiction front - I'll be watching for Crymble's second novel.

Read an excerpt of It Can Happen to You.

The book does sound interesting since Penny seems to come into her own.

I definitely enjoyed this book and would recommend it to fans of "women's fiction". Thanks for the review!

This sounds like a fun, fluffy read. I was literally laughing out loud during your review.

Sounds like something I'd enjoy when I'm in need of light reading. Thanks for the review.

This sounds really good...something that I would enjoy. Thanks for the review...I will add it to my ever-growing list. :)