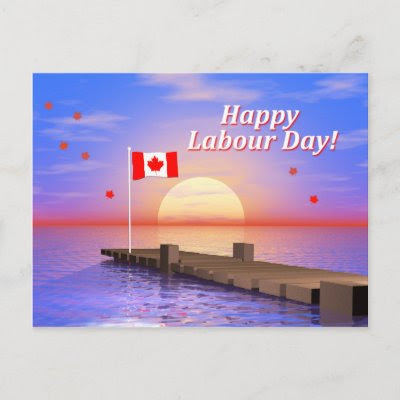 Hope everyone both sides of the border is enjoying a Holiday Monday. Thought I'd give you a quick history lesson on the origins of this day off.

"Labour Day has been celebrated on the first Monday in September in Canada since the 1880s. The origins of Labour Day in Canada can be traced back to April 14, 1872 when a parade was staged in support of the Toronto Typographical Union's strike for a 58-hour work-week. The Toronto Trades Assembly (TTA) called its 27 unions to demonstrate in support of the Typographical Union who had been on strike since March 25.

George Brown, Canadian politician and editor of the Toronto Globe hit back at his striking employees, pressing police to charge the Typographical Union with "conspiracy." Although the laws criminalizing union activity were outdated and had already been abolished in Great Britain, they were still on thebooks in Canada and police arrested 24 leaders of the Typographical Union. Labour leaders decided to call another similar demonstration on September 3 to protest the arrests. Seven unions marched in Ottawa prompting a promise by Canadian Prime Minister Sir John A. MacDonaldto repeal the "barbarous" anti-union laws.

Parliament passed the Trade Union Act on June 14 the following year, and soon all unions were demanding a 54-hour work-week.

The Toronto Trades and Labour Council (successor to the TTA) held similar celebrations every spring. American Peter J. McGuire, co-founder of the American Federation of Labor, was asked to speak at a labour festival in Toronto, Canada on July 22, 1882. Returning to the United States, McGuire and the Knights of Labor organized a similar parade based on the Canadian event on September 5, 1882 in New York City, USA. On July 23, 1894, Canadian Prime Minister John Thompson and his government made Labour Day, to be held in September, an official holiday. In the United States, the New York parade became an annual event that year, and in 1894 was adopted by American president Grover Cleveland to compete with International Workers' Day (May Day).

While Labour Day parades and picnics are organized by unions, many Canadians today simply regard Labour Day as the Monday of the last long weekend of summer. Non-union celebrations include picnics, fireworks displays, water activities, and public art events. Since the new school year generally starts right after Labour Day, families with school-age children take it as the last chance to travel before the end of summer. Some teenagers and young adults view it as the last weekend for parties before returning to school, which traditionally begin their new year the day after. From Wikipedia."
Posted by Luanne at 5:00 AM

Happy Labor Day to you.
(We actually chose the same pic for our blogs.)

I hope you have a great day too!

That's very interesting and probably isn't thought about often enough. We don't always remember the origins of our holidays. Enjoy the day, enjoy the week!

Happy Labor day to u too! I love it, no work today hehe ;]

I always hated Labor Day when I was a kid. It meant school was about to start again.

Labor Day around here is sort of a non-holiday anymore. The colleges are in session that Monday and grades K-12 may get a day off after already being in session for a couple of weeks.