Library of the Dead - Glenn Cooper 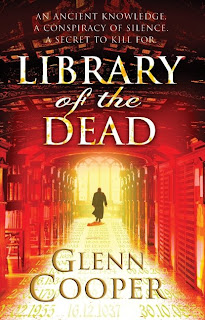 Library of the Dead, newly released from Harper Collins Canada, is a debut novel for author Glenn Cooper.

The book opens to a flashback from the year 777. It is the 7th day of the 7th month, and a village fearfully awaits the birth of a 7th son is born to a 7th son.

Fast forward to 1947. An discovery so unprecedented and considered a danger to the civilized world is secreted away in Nevada - in Area 51.

Fast forward again to present day New York City. FBI Agent Will Piper, once renowned with the agency for his success in profiling and capturing serial killers, has fallen from favour and is now counting down the months to retirement. But circumstances get him called in to deal with what the press is calling the Doomsday Killer. Victims are receiving plain white postcards with a date. That date is the day they die - and it's happened seven times so far.

How could these three scenarios be connected?

Cooper has created an intriguing plot, plausibly combining past and present. The flashbacks from 777 are especially gripping, feeding us snippets that may explain who or what Will is chasing. The premise is good and the action totally captured me from the first to last page.

Will as a personality blew a little hot and cold for me. I did like him as a character, but he seemed a little inconsistent sometimes, as did his partner Nancy. I think Cooper's character development will improve. He has already written the sequel, called Book of Souls, and I will definitely be picking it up.

Read an excerpt of The Library of the Dead.

Fans of James Rollins, Dan Brown and Brad Thor would enjoy this book.

I love books like this. I'll have to give this one a try at some point. Thanks for the review!

You've got me wondering how the plots are connected! Great review.

Ooh! Interesting! Another book for my WL!