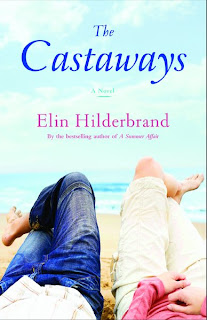 The Castaways by Elin Hildebrand is the latest selection of the Hachette Group Early Birds Blog Tour. What a perfect choice for a summer read! I'd love to be laying on the beach watching the waves too.

The Castaways is the story of four couples, all very close knit friends who live on the island of Nantucket. For twenty years, they've shared their lives with each other. When the unthinkable happens and one of the couples - Tess and Greg - drowns, things start to unravel. Was it really accidental? Could it have been murder? Although this is a pivotal question, the book is much more about the interpersonal relationships of all eight individuals. It seems that everyone has a secret or parts of themselves that they've chosen not to share with the others. The story is told in a non linear fashion as each tries to come to terms with their grief over the loss of Tess and Greg.

Each chapter is written from the viewpoint of a different character. Each character seems to know just a little bit more about Greg and Tess. We are teased as we learn more and more about the lives of these eight friends. Although the mystery of what happened is intriguing, it is the character development that captured my attention. I found I took a strong dislike to some of them. Andrea is Tess's cousin and as she is older she has always been protective of Tess. However I found her protectiveness and grief almost overdone. Her husband is the stoic Chief of Police trying to uncover the true story. Addison and Phoebe are the wealthiest couple. Phoebe has been self medicating for grief for years, but really comes into her own by the end of the book. Addison I didn't like either. The couple I did enjoy was farmer Jeffery and his wife Delilah. Jeffery is solid, Delilah is still finding her footing but loves life.

This is Hildebrand's sixth novel, but she was an author new to me. As she lives on Nantucket herself, her books have an added sense of authenticity. I definitely enjoyed it!

Read an excerpt of The Castaways.

Check out the other stops on today's tour.

And I love this cover!

I really enjoyed this book too. The characters were great and I enjoyed the scandals and mystery too!

I've heard such good things about this one, and I'm glad. I picked up a copy at BEA, and I can't wait to read it. Thanks for the review!

I love a book that reveals more and more about characters as the story progresses. I like being shown how my initial impressions can be very mistaken.

Thanks for the review...this one has definitely caught my attention!

You're right! ACTUAL waves and sand were the ONLY things missing from this one. :)

Great review, and welcome back to Canada! =)

This is on my summer must read list. Thanks for the review!