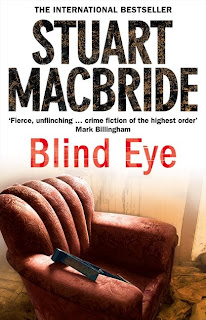 I'd heard of Scottish author Stuart MacBride, but had not sat down with one of his books till now. Wish I'd sat down sooner.....

They're put on the "Oedipus" case. Someone is really, really unhappy with the growing Polish population in Aberdeen. Men are found beaten with their eyes removed and the sockets burned. Letters explaining the reasoning behind this appear regularly at the station. Those still alive refuse to talk. The only witness is a local pedophile and he's disappeared. While trying to work on this case, McRae and Steel are at the same time plagued with escalating gang warfare. Not to mention their personal lives.....

Blind Eye is dark and gritty. The underbelly of the streets and alleys of Aberdeen come to life under MacBride's pen. Descriptions paint vivid pictures of both locales and characters.

The strongest and the most interesting by far are that of MacRae and Steel. Both are flawed human beings but possess an innate compass for what is right. That compass may go a little off base once in a while though. I really don't want to give away much more of the details of either character. I had great fun getting to know them throught their interactions. Their dialogue is priceless and the Scottish accent translates to print very well.

The supporting characters are also well portrayed. Their personalities and conflicts come to life and provide excellent secondary story lines. The humour in Blind Eye is dark and biting.

Although this book is part of a series, I never felt lost at all. I will be adding MacBride to my list of favourite crime authors!

It also somewhat reminded me of Guy Ritchie's movie RocknRolla.

Fans of Mark Billingham, Graham Hurley and Stieg Larsson would enjoy this book.

I've been a tremendous MacBride fan since his first book. His blog can be incredibly funny, too. I'm so glad you liked this book!

I have not read any of these authors and your review makes me feel like I am missing out on something. :) I have been in the mood for a mystery now for weeks.... no idea what is bringing that on but must go to where my reading genes call me...

I don't read many crime novels, but this one sounds good. Thanks for the review.

Hello, I have just got hold of a copy of Blind Eye(couldn't wait for the paperback to come out).I read a lot of crime thrillers and Stuart McBride is one of my firm favourites.I can't recommend his books highly enough.I like his blog site because it has photos of parts of Aberdeeen that are mentioned in the books.(saves me ages surfing the web!)

I am a massive fan of Stuart MacBride.I just got "blind eye" (I couldn't wait for the paperback to come out).I would highly recommend his work to all crime thriller readers.His blog site has photos of areas of Aberdeen that are named in his books.I'm also interested in reading his new futuristic non Logan McRae book soon.