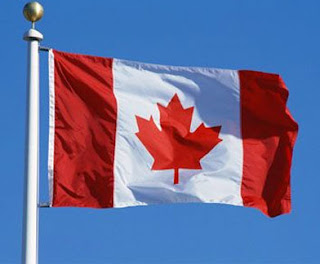 On July 1, 2009 Canada will celebrate it's 142nd year since Confederation.

Before 1982 Canada Day had been known as Dominion Day or Confederation Day. Canada Day celebrates the events that occurred on July 1, 1867, when the British North America Act created the Canadian federal government. The BNA Act proclaimed "one Dominion under the name of Canada," hence the original title of the holiday, "Dominion Day." Dominion Day was officially renamed "Canada Day" by an Act of Parliament on October 27, 1982. This change reflected the policy of successive governments to down play Canada's colonial origins.Canada's national celebration is always observed on July 1, unless that date falls on a Sunday, in which case it is observed the following day."

Email ThisBlogThis!Share to TwitterShare to FacebookShare to Pinterest
Labels: celebrate

YAY! Happy Canada Day to you too!

Happy Canada Day to you, Luanne. I liked your info about the holiday. My mother-in-law was born in Nova Scotia and she always called it Dominion Day. She passed away in 1973 so did not live to see the name change.

Right back at you Luanne!

Happy Canada Day back at ya!