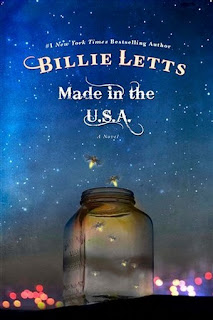 I've read all of Billie Letts' novels to this point. You may have heard of her first one - 'Where the Heart Is'- a New york Times bestseller, an Oprah pick and also made into a movie starring Natalie Portman. It is the story of a young pregnant teen who lives in the local Wal Mart.

Made in the U.S.A. returns to Wal Mart. Lutie and Fate McFee's father ran off to Las Vegas a year ago, leaving them behind with his girlfriend Floy. While shopping at the local Wal Mart, Floy drops dead. Fifteen year old Lutie decides that they shouldn't wait around for social services to put them into foster care, so they take Floy's car and head off to Vegas to find their dad.

With little money and unable to find their dad, they try to survive in Sin City. Some unknown good Samaritan seems to be watching out for them, leaving food and notes on the hood of the car they're living in - but it's not enough. Lutie and Fate are soon subjected to the ugly side of Vegas.

I'll stop there without going any further into the plot and spoiling the tale.

Letts' hallmark seems to be that family is not always biological. This theme was also the basis for 'The Honk and Holler Opening Soon'. And it's done well again in Made in the U.S.A.

Although it becomes somewhat predicable as to what's going to happen in the end, it is still an enjoyable, feel good read that will have you cheering for Lutie and Fate and the resilience of the human spirit.
Posted by Luanne at 6:55 AM

I hope to get my hands on this book sometime..it does look good..Ive only read "Where the Heart" is but all her books look good to read!

Every time I see this in the book store, I pick it up. There's just something about the cover that speaks to me. I may just have to actually buy it next time I pick it up.