Everything Under the Sky - Matilde Asensi 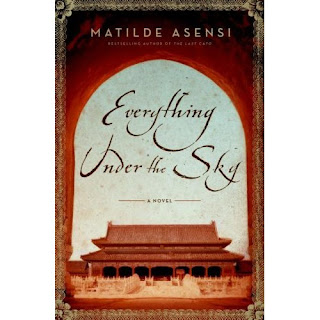 Matilde Asensi's novels are originally written in Spanish. Her previous novel The Last Cato was an international bestseller. Her latest novel, Everything Under the Sun ,is newly released from Harper Collins Canada.

Elvira DePoulain is a middle aged artist living in Paris in 1923. Although she has not lived with her husband Remy in twenty years, they are on good terms. When she receives notice that he has passed away, she travels to China with her orphaned young niece Fernanda to settle his affairs. When she arrives she is stunned by what awaits her. Remy died heavily in debt and under French law, she is responsible for payment. Still in shock, she is further disturbed when Paddy, an Irish journalist tells her that her husband was not randomly killed by thieves but was murdered by the Green Gang, as they believed he possessed an ancient carved box. They did not find the box, but Elvira does. A Chinese antiquarian- Lao Jiang - explains the box holds clues to a wealth of treasure. He persuades her to accompany him on the quest. She agrees as she needs the money to pay off Remy's debts.

Asensi does a wonderful job with descriptions of China and it's culture. Particularily fascinating are the explanations of the concepts of Tao and Feng Shui. Her puzzles are well thought out and rival any adventure book of this type- The Da Vinci Code for example.

Where I found myself wanting more was in the characters themselves. Although Elvira is portrayed as a strong, independent woman who grows even more along the trek, I just didn't buy it. Her pronouncements seem forced and awkwardly placed, especially those dealing with her niece. Much more interesting was Fernanda and the young servant boy Biao. Their youthful enthusiasm and intelligence came across as much more realistic. Lao Jiang seems to be written as a bit of a caricature, as does Paddy the Irishman. We know Lao Jiang is not quite what he seems with his brooding silences and taciturn manner.

All in all, not a bad read, but not as good as I would have hoped. Looking for something similar? Try James Rollins.