Back in 6 Years - Tony Robinson-Smith 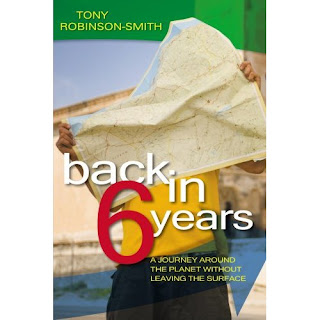 Subtitled - A Journey Around the Planet Without Leaving the Surface.

Tony Robinson-Smith has been teaching English in Japan for five years when he suddenly decides he's had enough. (having sung the only 2 english songs on the karaoke list at a bar over and over again may have helped swing his decison...)

He decides he will not travel by air at any time and heads back to England to begin his journey. With no firm plan, he hitchhikes his way through France and Spain without issue. Things get really interesting when he attempts to cross the Sahara and transverse Algeria. (Always take extra water....) He winds his way throughout Africa, reaches Cape Town and tries to figure out how to sell himself as an experienced (read none) seaman to cross the Atlantic. Each chapter is prefaced with a map tracing the route he is taking. I found it interesting to follow along.

And so his journey continues - around South America and up into North America. Although I found the entire book engrossing, I really enjoyed the chapters dealing with Canada. Tony decides to bicycle across Canada going east to west. However he starts out in April. Canucks will realize we can still get snow at this time - especially in the Maritimes.

"When would Canada warm up. No wonder ninety per cent of the bloody population lives huddled along the U.S. border"

It is also in Canada that he meets Nadya. Nadya joins Tony when he reaches the Asian part of his journey. The journey slows down a bit here and we are treated to more leisurely and detailed chapters.

All in all, Robinson-Smith manages to touch base in fifty-five countries. This book was written from his notes and journals. As an armchair tourist, I was enthralled by tales of places most of us will never visit. The locales he explores and people he meets are fascinating.

Most remarkable is that he achieves his goal - he never flies. But the whole adventure takes six years! Not many people would see this through to the end. Interestingly he is now teaching English in Bhutan. Wonder if there's a story there?

Yet another great memoir from Goose Lane Editions. Thanks to MiniBookExpo for the opportunity to read and review this book!
Posted by Luanne at 9:05 AM

I really enjoyed this book. It was skilfully crafted to appeal to a vast audience from the armchair traveller to an internationally globetrotter. It has the detailed reporting of a solid piece of journalism and the creativity of a great storyteller rolled into one. A must read for those who crave adventure.

I loved this book, it was one of the most entertaining, impressive and memorable travel memoirs I have read. I love it when people go on grand adventures such as this, because it inspires others and shows them that it is possible for them to go out and travel as well! Life's too short not to follow your dreams, no matter where in the world they take you!

You're right Kelly - and it looks like you're living your dream!