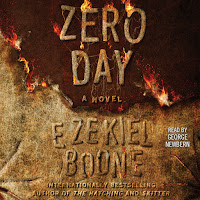 It's the final showdown. Man against the carnivorous spiders that are threatening the extinction of the human race. The first book was the outbreak, the second the continuing fight and in this last book it's do or die.

"The world is on the brink of apocalypse. Zero Day has come."

Yes, the premise reads like a B-movie plot, but it's great fun to read. And cringe -worthy, creepy, crawly spiders skittering all around.....

Boone has created an ensemble cast that I've come to know and enjoy over the course of the first two books and this is what kept me coming back. They are an eclectic group with many different outlooks and personalities and I'm hard pressed to pick a favourite. No surprise that there is an ending to this ongoing battle. And I have to say, I quite enjoyed the 'wrap-up' of where the lives of the large cast went. (And in that wrap-up I wonder if I'm the only one that thinks one or two of them might make appearances in the future?)

This trilogy could probably have been told in fewer pages, as the fight against the spiders seems a bit repetitive over the course of three books. That being said, Boone does have a way with words and does spin a good tale. I enjoyed his a wonderfully dark sense of humour. Boone fleshes out his narrative with lots of descriptions and side stories that I enjoyed.

I chose to listen to Zero Day, as I did with the previous books. The narrator was George Newbern, one of my favourites. He has a unique voice - clear, pleasant to listen to and easy to understand. He has a wry tone that matches the book and captures Boone's dark humour. His inflections rise and fall, giving the tale movement. Listen to an excerpt of Zero Day.

You can connect with Ezekiel Boone on his website or follow him on Twitter. He has a new book coming out later in 2018 called The Mansion - it looks like another fun read.
Posted by Luanne at 7:00 AM

I was unaware of this trilogy until reading reviews for this final book. I definitely need to backtrack and check out the whole story!