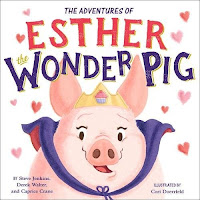 I first wrote about Esther the Wonder Pig back in 2016 when Steve Jenkins and Derek Walter inadvertently ended up living with a full sized pig instead of the mini-pig they thought they were raising. Esther changed their lives - and the lives of many others. (my review)

The True Adventures of Esther the Wonder Pig, written by Steve and Derek with Caprice Crane, is a retelling of Esther's story in a children's picture book format. It was perfect for Gramma and Little Guy storytime.

We had to stop at the forward for awhile as there is an actual photograph of Esther in a bathtub that fascinated him. I had to promise that we would go on the computer after we read the book to look at more pictures of Esther.

The first read through had us guessing how big the pig was going to get. And where would she sleep as she keeps outgrowing her beds? What will they do next? There are many themes and ideas to explore with subsequent readings. Love, animal rescue, pets and families of all shapes and sizes. Having read the adult version, I wondered if the picture would touch on veganism, but did not - that's a much heavier topic for a young one.

Cori Doerrfeld's illustrations are playful. She gives Esther expressions that can be 'read' by a child - most of then being happy. Steve and Derek's expressions are also easy to interpret. The colour palette used is bright and appealing, as are the illustrations. Doerrfeld has captured Esther's story with her illustrations.

Little Guy was quite taken with Esther and I am sure this is one book we'll be reading again. And the burning question that we had to investigate after reading? Can a pig really smile? What do you think!? 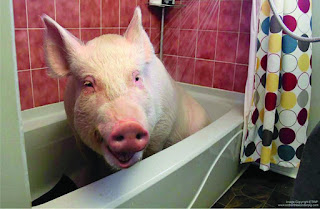 It does look like Esther is smiling. This book looks adorable.

Pigs are so adorable. She's definitely smiling. So much we don’t know about our 4 legged friends.
Glad you brought this to my attention. I’m going to purchase a copy of this!

Yes, bermudaonion, we decided it was a smile as well.

Icewineanne did you read the first book?

Yes, i just loved it. It was so heart-warming. I hope that everyone reads this wonderful book!

I went to the Esther's sanctuary a couple summers ago and am going again this summer :)

Icewineanne - it is an amazing story!

Teena - so neat that you've been to visit! I follow on Facebook and things seem to be ever changing and growing there.