Glory Over Everything - Kathleen Grissom 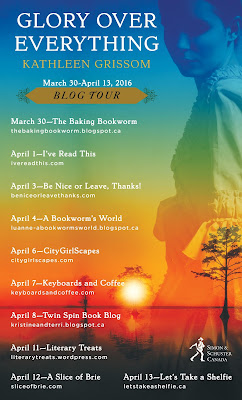 I read Kathleen Grissom's book, The Kitchen House back in 2010 when it was first released. In re-reading my review, I see that "I literally could not put The Kitchen House down. It's destined to be a keeper in my library". It's still there - and I'm happy to add the long awaited follow up to my library as well.

Glory Over Everything: Beyond The Kitchen House takes us back to the 1830's. In Philadelphia, Jamie Pyke has started a new life as James Burton. The son of a slave and her master, James is light-skinned - and is able to pass as white. But when a young boy in his care goes missing, James risks going back to the South to search for him. Pan's father saved James' life when he escaped the South.  James' past and present converge with grievous repercussions for not just himself, but many others.

The first book dealt with the depiction of slavery and those forced into such a life. I became so invested in those characters, their struggles and their hopes for a different life. Glory Over Everything explores some of those different lives, with James in the lead role.

I was torn about James - I knew I should really like him as he's doing the right thing by Pan. But he hesitates one too many times for me in his decision making and his choices. I recognize his struggle to escape the shackles of his past, both literally and figuratively, but I was disappointed by his initial, selfish choices at the expense of others. Others who have nothing, but willingly help him. So for me, it was the supporting cast who captured me - new characters Pan, Robert and recurring characters from the first book, notably Sukey. Sukey's chapters were the most poignant for me.

As much as some lives and circumstances have changed, most have not. The brutal ugliness that is slavery is still described, but not to the extent is was in The Kitchen House. Instead, there is a glimmer of hope in the Underground Railroad and the supporters of abolition. But the main thrust of the book is James' struggle to reconcile who he truly is with himself.

Oh, and the title? It's a quote from Harriet Tubman. "I looked at my hands to see if I was the same person now I was free. There was such a glory over everything. The sun came up like gold through the trees, and I felt like I was in heaven."

"Born and raised in Saskatchewan, Kathleen Grissom is now happily rooted in south-side Virginia, where she and her husband live in the plantation tavern they renovated." You can connect with Kathleen Grissom on her website, follow her on Twitter and find her on Facebook.

Do you think I need to read The Kitchen House first to enjoy this one?

No Bermudaonion - you could absolutely read this one as a stand alone. But I do recommend the first one too!