Mother May I - Joshilyn Jackson 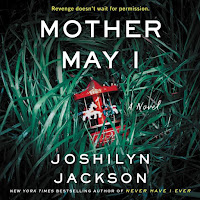 Mother May I is Joshilyn Jackson's latest release. If you're a suspense reader/listener, you're going to want to pick this one up!
Jackson starts things off with a great opener. Bree Cabbat is at her daughter's school, watching a practice. She has her infant son Richard with her. Or she did. Uh huh, she turns around and her baby is gone. But there's a note - warning her she is being watched and if she wants her baby back, she shouldn't call the police or deviate from the instructions she'll get. Bree is stunned - this can't be happening.
I love this type of premise - an everyday person thrust into an untenable position. There's so many avenues Jackson could take her story from this starting point. And she takes it down some unexpected - and dark - paths. Mothers (good and bad), motherhood and what a mother will do to protect her child are the backbone of this plot. She also takes a page from an issue often seen in the news as the impetus for the kidnapping. That opening set the pace for the rest of the book - it's non stop action from first page to last.
I really liked Bree as the lead character. I was behind her all the way as she follows the kidnapper's increasing demands. Her friend Marshall is also one of the good ones. And the bad ones? Oh, you'll have no problem labeling them at all.
I chose to listen to Mother May I. And a lot of that choice was because Jackson herself narrates the book! What a treat to have an author read their own work. She brings the tension, the danger, the emotions and more to life as she presents her work. Her diction is clear, pleasant to listen to and is very, very expressive. She provides believable voices for all the characters, allowing the listener to know immediately who is speaking. They also suited the mental images I had created for the players. Her presentation has lots of movement, sharing the tone and tenor of the plot very easily. Hear for yourself - listen to an audio excerpt of Mother May I.
Remember that game? Mother May I? Jackson takes it to a whole new level! There are a few bits that require a pinch of salt (that's the pragmatist in me talking) but they in no way detracted from my enjoyment of Mother May I. A great listen.
Posted by Luanne at 9:00 AM

Thank you for a great review.

Thanks for reading Mystica!